Yesterday, I had a running accident. As I was hitting 5 miles in a local neighborhood, something went wrong. For a moment I was distracted, I heard someone in their yard/garage area and immediately looked up (sometimes cars back out and cannot see runners due to landscaping, dogs are sometimes off leashes, etc.). The next thing I knew, a lady was by my side asking “are you OK”.

My pace had picked up for the final leg of my run since I was on smooth sidewalks (prior I was running brick streets which require 100% concentration so ankles are not twisted). Apparently, there was an uneven spot and my toe must have hit it while taking a stride and I crashed full force into the sidewalk. My sun glasses and iPhone were thrown 10 feet away from my body. In all honesty, I didn’t even realize what had happened, I do not remember tripping and falling. I was kind of disoriented, wondering why I was on the ground.

The nice lady helped me up and insisted I come inside. I was shaking nonstop, my body was in shock from the fall. Blood was running down my knees, arms and hand. She helped me inside and gave me paper towels and a glass of ice water, then insisted on driving me home. I don’t think I could have made it home walking, my knees were in bad shape. I was mortified that I fell but so thankful for this stranger’s kindness! I plan on dropping by a thank you card as soon as I am not hobbling.

I was in a lot of pain and could hardly bend one knee, so decided to get checked out. The doctor took several x-rays of my knee and elbow. He also did squeeze tests to make sure my hands/wrists were OK and examined my shoulder. The x-rays did not show any breaks (I was concerned about my right knee cap due to the pain and swelling), but thankfully I checked out OK. He let me know my x-rays would be sent to radiology for further review, and sent me home with prescription Motrin because he said I was going to be hurting the next day (and he was correct)!

While at the doctor, I learned about the explosions at the Boston Marathon finish line. I became enraged about how this could have happened, about the runners trying to achieve their goal and cross that finish line, how they were doing what they loved and were attacked. I cannot imagine the fear. My mind was (and still is) spinning, I do not understand how anyone could be so evil and want to harm innocent people.

My almost 5 year old son was with me at the doctor and saw the continuous coverage and kept asking why bombs were going off, why there was smoke at a race and if anyone was hurt. I had him focus on the rescue efforts, how people were helping those injured. Then I gave him my iPhone and let him play games to distract his little mind. 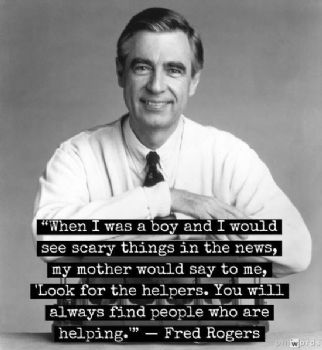 When I was a boy and I would see scary things in the news, my mother would say to me, “Look for the helpers. You will always find people who are helping.”