Recently, a family member joined facebook and liked The Unemployed Mom page. I found it odd that he liked 2 pages named “The Unemployed Mom” with the exact logo. Upon further investigating, I realized someone in Oklahoma had stolen my logo and started a new page with only 1 follower (and that follower was of course the guilty person). I was beyond furious! I immediately reported the page to facebook for trademark infringement and started doing some investigating of my own.

These screenshots have been cropped and/or blurred so I do not share any of this guilty party’s personal information. 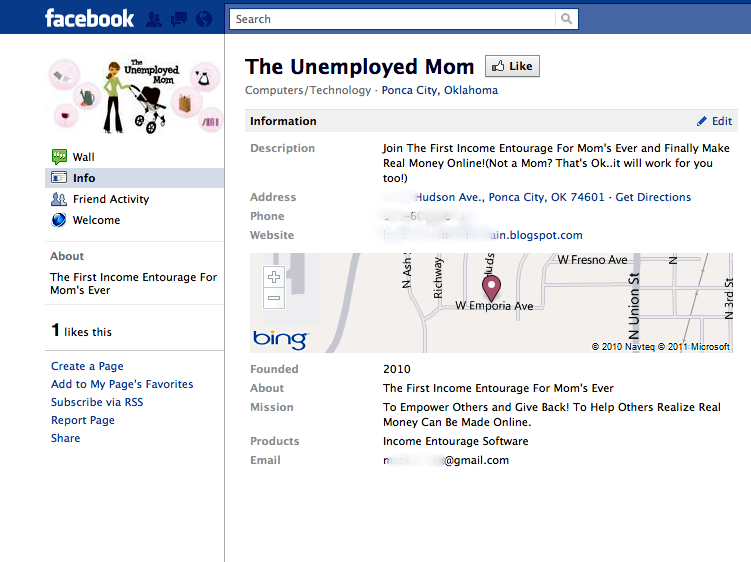 Sure enough, this lady used a story similar to mine to try to push a “you can get rich at home” gimmick. I visited her blog and the very first blog post contained my customized logo that I paid a lot of money for! I decided to leave a comment to let her that the logo was stolen as well as the name and that I would be involving a lawyer. 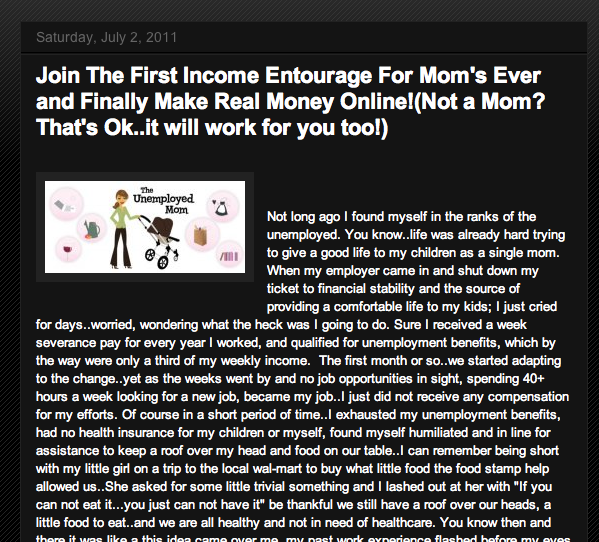 She initially removed the image from her blog and facebook page but kept the name “The Unemployed Mom”. She then swiped another image from google and continued. I commented again to let her know that was unacceptable!  She finally deleted the facebook page completely.

Here is the message titled “apology” she sent to my via the “contact” tab on my blog.

First I want to apologize for the honest mistake I made. I wanted to make a post to promote an affiliate link, did an internet picture search for a picture to use on my blog entry, your logo showed up, I thought it was cute, so I copied and pasted it. From the post I had the idea for a facebook page, which you do not have one according to the verification I did before creating the facebook page. With that said, once I received the rather rude comments, and doing a search for your blog name and finding out that I did indeed use your logo and name, you will notice I removed your logo, and the facebook page. This was an honest mistake. I do apologize and wish  you much success!

An honest mistake? Really?! I didn’t know it was legal to copy and paste an exact image without gaining permissions from the owner! Isn’t that something we learn in Internet 101? As for me being rude in my comments, I would say “threatening” would be a more appropriate word since legal jargon was thrown into the mix.

I have no tolerance for people who take from others in order to promote themselves. My husband says “Imitation is the sincerest form of flattery” but I have to tell you, flattery wasn’t the word that came to mind that night!