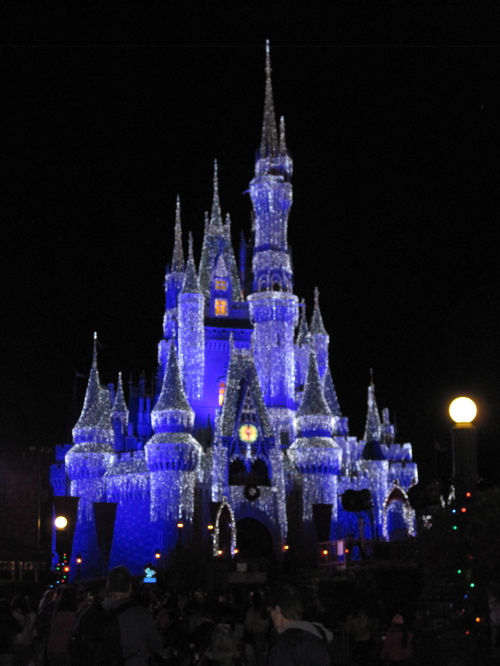 I love Christmas! It’s such a magical time to spend with loved ones and I cannot think of a more perfect place than Disney! For the very first time, we attended Mickey’s Very Merry Christmas Party at the Magic Kingdom and it was wonderful. In order to attend Mickey’s party, you must purchase a separate event ticket (your daily park ticket will not allow you access). Advance purchase is advised since tickets seem to sell out!

Some of the party features include:

Upon entering the park, guests receive a wrist band. This helps cast members recognize party guests and allow them access to the festivities. If you attended Mickey’s Not So Scary Halloween Party, it is pretty much the same process. We were required to show our wrist bands several times to gain access to festivity areas. 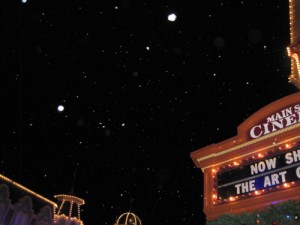 While strolling down Main Street, U.S.A., we enjoyed snow flurries. Even though it was created snow, it was still magical! The backdrop of the street immediately caught my attention and I made my way through the crowd directly to the castle. Words cannot even describe how beautiful Cinderella’s castle is with the enchanted Castle Dream Lights. My photos did not even begin to capture the beauty.

Once we snapped pictures, the cold temperatures started to make us shiver so we decided to go inside the Harbour House for some complimentary sugar cookies and hot cocoa. Everyone else must have had the same idea because the line was longer than many of the rides that night! Thankfully, the cast members were efficient and in just a few minutes I was carrying my tray filled with goodies. The cookies and hot cocoa hit the spot! The cookies were decorated with holiday sprinkles and tasted delicious. The hot cocoa was also incredible and helped warm us up!

After that, we quickly headed towards Tomorrowland. Although my son asked to ride the Mad Tea Party ride, I refused based on our experience at Mickey’s Not So Scary Halloween Party! Instead, we went straight for the Tomorrowland Speedway since there was no spinning involved. The line was short so we took advantage and let him drive the cars over and over! That was the highlight of the night for him! We hit several of the hot cocoa and cookie locations to warm up, including some with character dance parties! We were able to get up close and personal with Chip, Dale, Pluto and Goofy at Cosmic Ray’s Starlight Cafe. People of all ages had smiles plastered across their faces, it was a fun experience.

After a few more rides and a visit to the Swiss Family Treehouse, we headed towards the Baby Care Center. We knew the Holiday Wishes: Celebrate the Spirit of the Season fireworks were about to begin and realized we had a decent view from that area. So, we decided to snuggle with my son and enjoy the spectacular display. There is something about Disney fireworks that always bring a tear to my eyes, and these were no different. Absolutely spectacular! The fireworks made holiday shapes in the sky and the music was set to some familiar Christmas tunes. My son actually cried when they were over, he wanted to see more. Here’s a little video I took.

We didn’t catch the parade and headed out after the fireworks since the temperatures were unseasonably cold for Florida. All in all, we had a wonderful time though!

Here are some additional photos from our magical night at Mickey’s Very Merry Christmas Party!

* Disney provided tickets for my family to attend the Mickey’s Very Merry Christmas Party; however, the opinions expressed are my own.