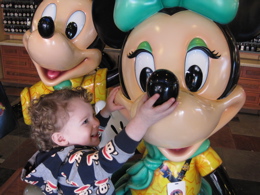 The other day, I took my son to a sneak peak of DisneyLive! Mickey’s Rockin’ Road Show at our local library. The event was supposed to give everyone a chance to see what the new traveling road show was all about; however, we hardly got a glimpse. First off, there were at least 500 children ranging from infants up with their parents or teachers. There were dozens of buses parked outside the library, so I should have expected a large crowd…but I never imagined seeing THAT MANY people sitting on the floor inside the library.

The show started 20 minutes late and the crowd grew restless. The children were chanting “Mickey Mouse” at the top of their lungs, but it still didn’t speed up the pace. I’m not sure what the problem was, perhaps the traveling road show forgot their GPS and couldn’t find the library? Finally, someone came out to read a story to the children. Keep in mind, the book was normal sized so the only people who actually saw the pictures were the fortunate ones seated up front.

Once the story that no one could see or hear was over, the chanting for Mickey started again. Finally, the show was about to start and the excitement was building. Tigger took the stage and danced for less than 2 minutes (I am not exaggerating). Then, a library worker announced that everyone could meet Tigger, just stand in line. Was she serious? They wanted 500 kids to stand in line to meet Tigger? This wasn’t Disney World! That would take forever! But, the kids raced to the stage and it was complete chaos. The parents started asking whether the show was over and if Mickey and Minnie would make an appearance (the advertisements said that Tigger, Mickey and Minnie would be performing).

Long story short, the unorganized chaos continued with the people flocking on stage to touch Tigger and take photos with him. The line concept was useless. Many parents packed their kids in strollers and left. Buses started filling up and the crowd was cut in half. Finally, Mickey and Minnie walked out and the screams were out of control by those remaining. They did not perform, instead…you guessed it, there was another announcement to form a line to meet them.

My kid was going nuts, he is infatuated with Mickey so we tried to stand in the non-existing line. We waited for 10 minutes and didn’t even take one step forward, so I promised him we’d see Mickey another day and we left (I guess I’ll be buying season passes again after all).

There were Disney Live $3 off coupons being handed out (sorry, but that doesn’t even begin to cover ticketmaster’s outrageous fees that they tack on). I laughed because this preview was supposed to get us excited about the show, yet I have no clue what it is going to be about. My coupon went straight into my recycling bin!

I do not want to sound unappreciative because it was a free activity; however, I am extremely disappointed with the lack of coordination. From now on, I’m sticking to Toddler Time ONLY at the library!