Yesterday a SeaWorld veterinarian successfully removed a fishing hook embedded in the mouth of a rescued loggerhead sea turtle. 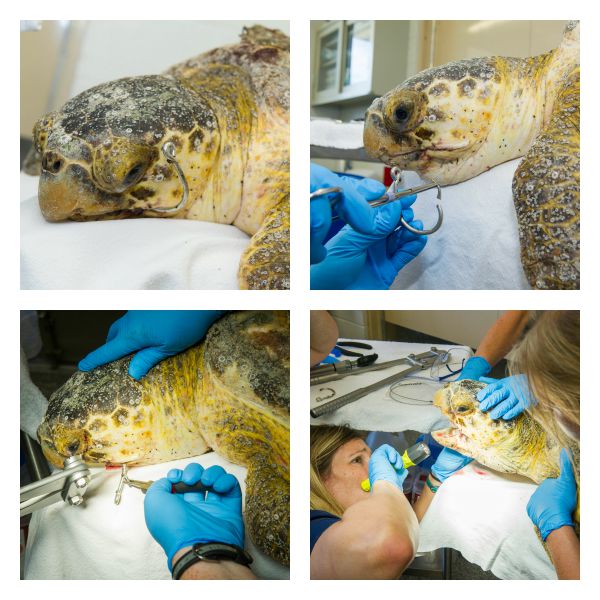 The juvenile loggerhead sea turtle weighs approximately 60 pounds and was rescued near Jetty Beach, Florida, by the Sea Turtle Preservation Society. The animal was brought to SeaWorld Orlando for immediate medical attention and rehabilitation.

After the turtle was stabilized and initial health tests and blood work were completed, the SeaWorld team was able to take X-rays to better gauge the depth and degree of damage from the hook before removal. Fortunately, the embedded hook was a “circle” hook and was quickly removed without causing any additional trauma to surrounding tissue. Circle-shaped hooks are recommended for fishing because sea turtles are less likely to swallow the circle-shaped hook than traditional J-shaped hooks. Traditional J-shaped hooks can cause suffocation or internal bleeding when swallowed.

Immediately following the procedure the turtle began swimming and eating. SeaWorld’s animal experts will continue to monitor its health over the next several weeks.

So far in 2015, SeaWorld Orlando has rescued 53 sea turtles, double the average for this time of the year, and returned 76.

More than 26,000 animals have been rescued by SeaWorld’s animal rescue team that is on call 24 hours a day, 7 days a week.

To report someone disturbing a sea turtle nest or an injured, dead or harassed sea turtle call 888-404-3922 or dial  *FWC on a cellular device.

Learn more about our passion for conservation and animal welfare at SeaWorldCares.com.