at the 125th Annual Rose Parade 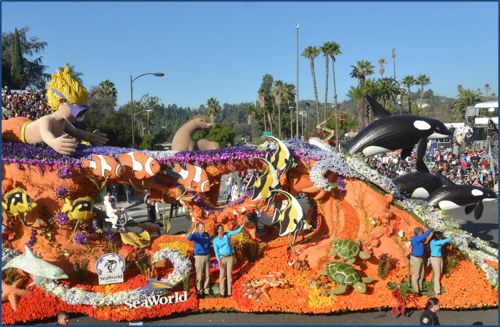 SeaWorld’s “Sea of Surprises” float won the prestigious President’s Award at the 125th annual Rose Parade on New Year’s Day.    This award is presented to the float with the “Most Effective Floral Use and Presentation.”

The 55-foot-long float was a festive tribute to SeaWorld’s 50th celebration kicking off this year, and featured some of the park’s most popular animals.     Hundreds of thousands of flowers and natural materials made up the colorful reefs, waves, coral and sea life displayed on the float.   SeaWorld San Diego employees donated time to work alongside float builders and help apply live flowers.

An inspiring new song debuted on the float – SeaWorld’s new theme song “Beneath the Blue.”    This song will be heard during special occasions and as part of park background music in the coming year.