My little guy was excited about potentially staying up to ring in 2014. He’s almost 6 and we thought it would be fun for him to watch the ball drop and feel the energy in NYC.

We got in our pajamas and settled in to watch the live coverage. Even though he had no clue what he was going to see, he was excited. He has been to New York and was pointing out stores, restaurants and hotels he recognized in Times Square.

He counted down the final minute of 2013, received a kiss on each cheek from mommy and daddy at 12:01 and yelled “Happy New Year”.

His reaction was “I didn’t really see a ball drop mommy“. It’s true, we were streaming live and for some reason, they showed the start of the ball dropping and that was it! It was disappointing to say the least.

But…he did it, he stayed up past midnight and welcomed 2014! 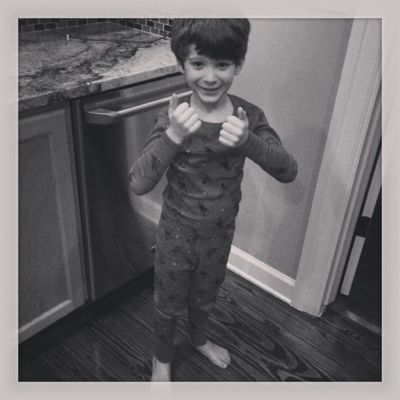 2014 is going to be an awesome year! Wishing everyone a healthy 2014 filled with lots of love and laughter.