February 6, 2013 (Orlando, Fla.) – A manatee was returned to the St. Johns River in Blue Spring State Park this morning after rehabilitating at SeaWorld Orlando for the last year.

“Slip” was brought to SeaWorld Orlando on January 4, 2012, after being rescued from Crescent Lake near Palatka, Fla., due to symptoms he suffered from cold stress. After he was medically cleared for today’s return, the park’s Animal Rescue Team transported the 21-year old manatee to Blue Spring State Park, an area well-known for its manatee population.

Slip’s health was evaluated upon arrival at the park by SeaWorld animal experts and Sea2Shore Alliance. The 1,100-pound manatee was then carried by more than a dozen people into the spring, where a group of manatees were seen swimming nearby. 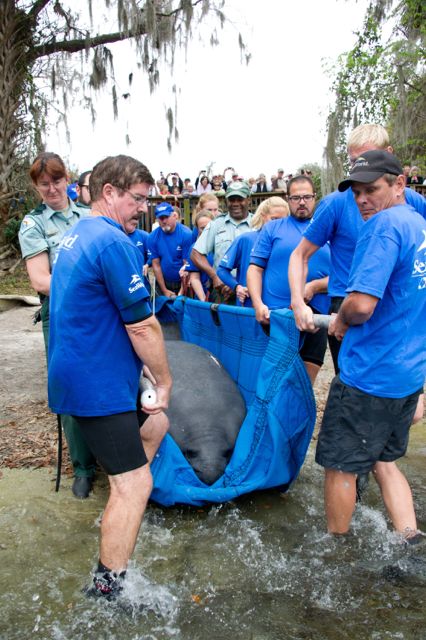 In collaboration with the government and other members of accredited stranding networks, SeaWorld Parks & Entertainment operates one of the world’s most respected programs to rescue ill and injured marine animals, with the goal to rehabilitate and return to the waters. SeaWorld animal experts have helped more than 22,000 animals in need – ill, injured, orphaned and abandoned – for more than four decades. So far this year, SeaWorld Orlando has rescued two manatees and returned one.