Cancer is a beast for anyone who must battle it, but what if it was your child? Just thinking about that makes a lump form in my throat. A former co-worker’s son is battling cancer for the second time at the young age of 12. 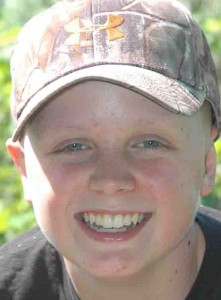 Let me introduce Kellen Walden – a high spirited child who enjoys playing with his friends, camping, basketball and anything to do with the outdoors. He has a big brother named Murphy and a dog named Sparkles. His mom and dad are very proud of him.

Kellen has been diagnosed with a very rare brain tumor called Ectomesenchymoma. There are only five cases of this type of cancer in the world. He has been fighting off this beast for the past two years. We can all join Kellen and his family in their fight. They are committed to helping a local organization called CureSearch raise funds to fight Pediatric Cancer in Central Florida. The scary truth is Pediatric Cancer is spreading and research dollars are growing scarce. Orlando does not have any funding or appropriate equipment and that must change!

Kellen’s family is participating in Orlando’s very first “CureSearch Walk” on April 16, 2011 at Lake Eola. Their goal is to raise funds and awareness on the devastating effects of Pediatric Cancer and the precious children and families fighting through it.

There are several ways YOU can help!

Any contribution you are able to make will have a significant impact for the cause.

I have also set up a page where you can contribute and am excited to walk! I am anxious to help Kellen and all the other brave children fight their battles! Together we are more! Thanks for the support!