If you have visited the Magic Kingdom lately, you probably noticed the construction going on near Fantasyland and Mickey’s ToonTown Fair. Disney has kept the expansion plans quiet; however, the Disney Parks Blog released an update so we now know exactly what is going on behind the scenes. 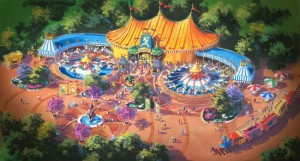 Are you curious? The official blog with full details can be read here.

Sounds like the princesses are all going to be very happy since they will have a permanent home. Also, the Dumbo ride will be expanded to have two carousels! The existing Snow White ride will be closed (it will be transformed into a Princess Fairytale Hall) and the story will be told in a new light with the “The Seven Dwarfs Mine Train”.

I noticed Tinker Bell and her friends will be relocated to Epcot, so my only question is whether she will still fly every night during the fireworks? I hope so!

The expansion is the largest in Magic Kingdom history and the result will be a Fantasyland that is almost double in size! I know some will be opposed to the changes, but I am excited.