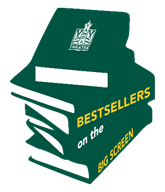 “BESTSELLERS ON THE BIG SCREEN”

It’s an age-old debate between the bookworms and the cinephiles: if the book was “better” than the movie based upon it, or whether it was more effective on film… even if “they changed the ending.” But there are those perfect plots that straddle both, proving equally effective as an “edge-of-your seat” movie experience and “a real page-turner” in print.

Those are the stories that Tampa Theatre celebrates with this year’s “Bestsellers on the Big Screen” classic movie series: those that enjoyed critical and popular success as books that then went on to be equally impressive films. Included in the lineup are:

Sometimes a good movie can make you reconsider something you always took for granted. Jaws made audiences afraid of the beach. Psycho made people afraid of taking showers. And Gone Girl asks: how well do you really know the people you love?

2014 film phenomenon Gone Girl (based on the 2012 novel of the same name) does what a lot of fantastic movies do: it transcends genre by mixing them in a novel combination. Part police procedural, part Fatal-Attraction-style relationship thriller, part old-fashioned mystery, and all put together with the crystalline flawlessness of its Gillian Flynn script and the queasy, voyeuristic, in-your-own-backyard dread of David Fincher’s direction, Gone Girl hammers its way into your mind and refuses to leave until long after it’s over.  2h 29m / R / Mystery / 2014

Herman Melville’s Moby-Dick, one of the first works to receive the moniker of “The Great American Novel,” is epic not just in scale and theme, but in the skill of its construction. Captain Ahab’s struggle for revenge against the monstrous white whale that maimed him, told with humor and poetry and power, has riveted readers for generations. And while the 1956 adaptation was not the first version put to film – nor was it the last – it does perhaps the best job of capturing a singular feature of the novel’s composition: its taste for spectacle. Directed by Hollywood legend John Huston, written in part by Ray Bradbury, and with Gregory Peck’s bombastic performance as Ahab, it couldn’t have turned out any other way.  1h 56m / Not Rated / Adventure / 1956

Alice Walker’s The Color Purple won a Pulitzer Prize for fiction and a National Book Award upon its release in 1983. It tells the story of Celie, born in rural Georgia in the early 1900s, a young woman who knows only cruelty for most of her life. Her world is saturated in violence and oppression; nothing good happens to her for a heart-wrenchingly long time. But the promise, the indefatigable hope of The Color Purple (and of Celie herself) is that someday, some good will come into her life. And it does, though the shape that good comes in is surprising. Director Steven Spielberg excels at telling richly human stories, and groundbreaking, explosive performances from Whoopi Goldberg, Oprah Winfrey and Danny Glover drive The Color Purple beyond the mere sentiment of the decades it spans and into epiphany.  2h 34m / PG-13 / Drama / 1986

Hunter S. Thompson was a true American original. His style of gonzo journalism, a frenetic cocktail of personal anecdotes and incisive analysis, revolutionized the way news and culture was reported by abandoning “pure” objectivism (which was never attainable anyway). He was both observer and the object of his own observation; had he not been born, the late ’60s and early ’70s would have invented him anyway.

So it stands to reason that the influence of such a character would loom so enormously over the movie based on his most popular work. Johnny Depp (a personal friend of the real Hunter S. Thompson) is, yes, just doing an HST impression for most of this movie. But his performance, along with the trippy and fantastical direction of Terry Gilliam, is exactly appropriate for the story being told: Fear & Loathing in Las Vegas is a meditation on the end of 1960s counterculture, a reflection on the Dali-esque melting of the American Dream – and one heck of a road trip.  1h 58m / R / Comedy / 1998

Based on the 2005 novel of the same name by (part-time Tampa resident) Michael Connelly, The Lincoln Lawyer is half courtroom drama and half whodunit, with the interesting twist of an attorney who works out of his chauffeur-driven car. Tightly paced and original, with a deep and well-chosen cast, The Lincoln Lawyer ticks like clockwork from introduction to ripping conclusion. But there’s an interesting twist outside of the fiction itself as well; The Lincoln Lawyer was, to a large degree, the first step in Matthew McConaughey’s recent reinvention of himself. He went from largely playing the lead in romantic comedies like The Wedding Planner and Failure to Launch to earning an Academy Award and Golden Globe for his role in Dallas Buyers Club and an Emmy nomination for True Detective. And it started right here. Who says there are no second acts in American lives?  1h 58m / R / Crime Drama / 2011

Tickets for the Bestsellers on the Big Screen classic movie series are $10 ($8 for Tampa Theatre Members) and are available at the Theatre’s historic Box Office, 711 N. Franklin Street, and online at www.TampaTheatre.org (service fees apply.)

Oxford Exchange will be in the lobby before each screening selling copies of that week’s book and other, relevant titles. The series coincides with the OE Spotlight event George Saunders with Thomas Pierce and David James Poissant: An Afternoon Conversation and Signing at Tampa Theatre on Saturday, Feb. 18. Short-story icon and MacArthur ‘genius’ grant winner George Saunders takes to the historic stage of Tampa Theatre in celebration of the release of his highly-anticipated debut novel, Lincoln in the Bardo. Saunders, who Time Magazine called “the best short-story writer in English”, will be joined by 2016 National Book Foundation ‘5 Under 35’ honoree Thomas Pierce and LA Times Book Prize finalist David James Poissant for a landmark conversation about writing, humor, and the role of fiction in contemporary life. For details and tickets, visit www.TampaTheatre.org/george-saunders/

Built in 1926, Tampa Theatre hosts more than 600 events each year, including new-release films, classic movies, live concerts, corporate events, educational programs, weddings and tours. It is a passionately protected landmark and one of America’s best-preserved movie palaces. The majestic building is owned by the City of Tampa and operated as a dynamic film and cultural center by the not-for-profit Tampa Theatre Foundation. Programming is sponsored in part by the State of Florida, Department of State, Division of Cultural Affairs and the Florida Council on Arts and Culture, the Hillsborough County Board of County Commissioners, and the Arts Council of Hillsborough County. Tampa Theatre is a proud member of the League of Historic American Theatres and the Art House Convergence.