— Pair was rescued on Mother’s Day; mother fitted with custom-made wetsuit as part of life-saving treatment — 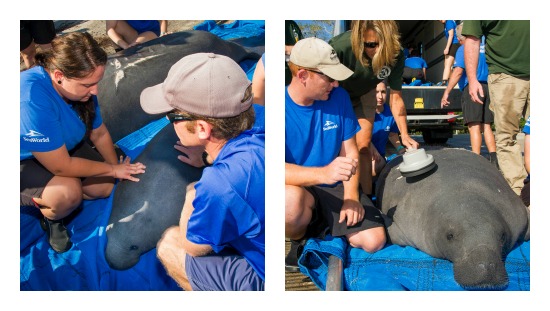 The mother manatee was injured by a water craft strike and was treated at SeaWorld Orlando for buoyancy issues due to a collapsed lung. The condition, known as a pneumothorax, was likely caused by the blunt force from the boat strike. For a manatee, not being able to float evenly in the water is a serious issue, causing problems with feeding, swimming and coming up to the surface for air. To treat the collapsed lung, the SeaWorld Orlando Veterinarian team outfitted her with a “manatee wetsuit” the park designed for such rescue cases. The wetsuit not only helps assist the manatee with floating, but also helps prevent pockets of air and fluid from returning.

The calf, estimated to be 2 years old, was unharmed by the water craft but was still nursing and dependent on his mother. It was important that the pair remained together throughout the rehabilitation as the calf continued to grow and learn from his mother.

So far in 2015, SeaWorld Orlando’s Animal Rescue Team has rescued 32 manatees and has returned 29 manatees back to local waterways. The goal, as with every rescue, is to return the manatee back to its natural environment once strong enough to survive on its own.

In collaboration with the government and other members of stranding networks, SeaWorld Parks & Entertainment operates one of the world’s most respected programs to rescue ill and injured marine animals, with the goal to rehabilitate and return to the ocean. SeaWorld animal experts have helped more than 26,000 animals in need – ill, injured, orphaned and abandoned – for more than five decades.

The MRP is a cooperative group of non-profit, private, state, and federal entities who work together to monitor the health and survival of rehabilitated and released manatees. Information about manatees currently being tracked is available at www.manateerescue.org. The endangered Florida manatee is at risk from both natural and man-made causes of injury and mortality. Exposure to red tide, cold stress and disease are all natural problems that can affect manatees. Human-caused threats include boat strikes, crushing by flood gates or locks, and entanglement in or ingestion of fishing gear.

November is Manatee Awareness Month, a time to increase public awareness and knowledge of this incredible species. Unfortunately, manatees’ greatest threats are a result of human interactions. Due to their dark color and slow speed, manatees are difficult to see in the water by boaters. Although engine propellers are dangerous, collisions with boats cause the most watercraft-related deaths. Watercraft collisions cause life-threatening internal injuries that are often hard to locate and treat. Other threats to manatee populations include fishing gear entanglement, navigation lock entrapment, habitat destruction and cold weather stress. Through education on migration patterns and a heightened sense of awareness on our waterways, we can do our part to help protect these amazing animals.