Here’s yet another example of the amazing efforts by the SeaWorld Animal Rescue Team! They have already rehabilitated and returned more than 70 turtles so far in 2015! 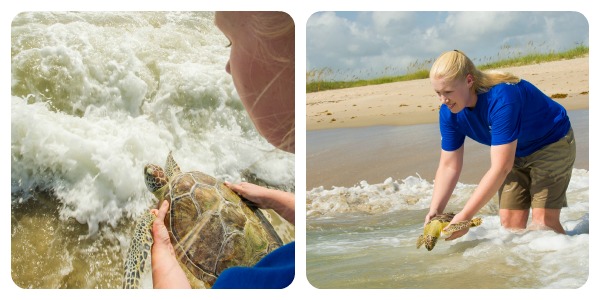 As part of treatment, both turtles received a balanced diet, increased vitamin intake, and daily care by SeaWorld Orlando’s veterinary and zoological staff.

After a positive trend in health and several medical tests, the decision was made that both animals were ready to be returned. The SeaWorld Animal Rescue Team works closely with the Florida Fish and Wildlife Conservation Commission to determine when a rescued animal can be returned and where.

So far in 2015, SeaWorld Orlando has rescued 49 sea turtles, double the average for this time of the year, and returned 70. For more than 50 years, SeaWorld Parks & Entertainment has helped animals in need – ill, injured, orphaned or abandoned – with the goal of returning them to the wild. More than 26,000 animals have been rescued by the expert animal rescue team that is on call 24 hours a day, 7 days a week.

To learn more about SeaWorld’s commitment to animals and the environment, visit SeaWorldCares.com.