You now have three healthy kid’s meals to choose from, served with a lingonberry, elderflower juice drink or a bottle of water:

All registers can accept cash donations this year, not just the ones in the food-serving areas. Another important tidbit is that even on “Kids Eat Free Tuesdays”, IKEA will donate the dollar. Parents simply need to select one of the healthy kids meals included in the campaign. 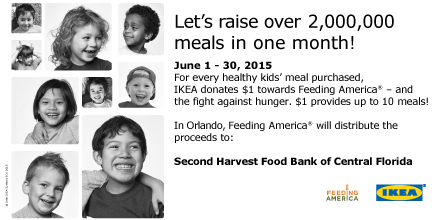 The entire press release is below:

The ‘Feeding the Future’ IKEA US program will donate $1 to local Feeding America food banks for every healthy kids meal purchased in any IKEA US restaurant. Additionally, IKEA customers can add $1 donations at all IKEA store registers at cash lanes, customer restaurants, IKEA Bistros and Swedish Food markets. Added donations will go to Feeding America and its network of food banks.* The three healthy kids meals in the ‘Feeding the Future’ program include:

(All healthy kids’ meals come with lingonberry, elderflower juice drink or a bottle of water.)

“There are 49 million people in America who struggle with hunger, including 12 million children. This is an issue that impacts every single county in the country” said Nancy Curby, vice president of corporate partnerships at Feeding America. “With IKEA’s commitment, our food banks will be able to better serve children and families who may not know where there next meal will come from.”

The process of getting food to hungry Americans requires a dynamic infrastructure and sophisticated management. Feeding America secures donations from national food and grocery manufacturers, retailers, shippers, packers and growers – and from government agencies and other organizations. Feeding America then moves donated food and grocery product to member food banks.

The food banks in turn distribute food and grocery items through food pantries and meal programs that serve families, children, seniors and others at risk of hunger. Last year alone, the Feeding America network distributed more than 3 billion meals to people in need.

The Feeding America nationwide network of food banks also supports programs that improve food security among the people served; educates the public about the problem of hunger; and advocates for legislation that protects people from going hungry.

*IKEA donation up to a maximum of $50,000 not including direct customer contributions.

The IKEA vision is to create a better everyday life for the many people. Our business idea supports this vision by offering a wide range of well-designed, functional home furnishing products at prices so low that as many people as possible will be able to afford them. There are currently 315 IKEA Group stores in 27 countries. Additionally, there are 40 IKEA stores run by franchises. There are 40 IKEA stores in the US. In FY 14, IKEA Group had 716 million visitors to the stores and 1.5 billion visitors to IKEA.com.  IKEA incorporates sustainability into day-to-day business and supports initiatives that benefit children and the environment. For more information, please visit www.IKEA.com, facebook.com/IKEAUSA,  @IKEAUSANews, @IKEAUSA, http://pinterest.com/IKEAUSA/, www.youtube.com/IKEAUSA,  www.theshare-space.com, www.theshare-space.com/en/Blog

Feeding America is a nationwide network of more than 200 food banks that leads the fight against hunger in the United States. Together, we provide food to more than 37 million people through 61,000 food pantries, soup kitchens, and shelters in communities across America. Feeding America also supports programs that improve food security among the people we serve; educates the public about the problem of hunger; and advocates for legislation that protects people from going hungry. Individuals, charities, businesses and government all have a role in ending hunger. Donate. Volunteer. Advocate. Educate.  Together we can solve hunger. Visit ttp://www.feedingamerica.org/. Find us on Facebook at www.facebook.com/FeedingAmerica or follow us on Twitter at www.twitter.com/FeedingAmerica.