Congratulations to SeaWorld Orlando for returning their 25th manatee of the year! Check out the press release below! I also encourage you to read my behind-the-scenes Conservation & Rescue Tour post to learn more about the SeaWorld Animal Rescue Team.

Earlier today, following ten weeks of rehabilitation at SeaWorld Orlando, SeaWorld’s Animal Rescue Team returned a female manatee to the waters of Crystal River, Fla.  The manatee, named Magnolia, was rescued 500 miles north of SeaWorld Orlando in Alabama earlier this year after being found injured and suffering from cold stress. 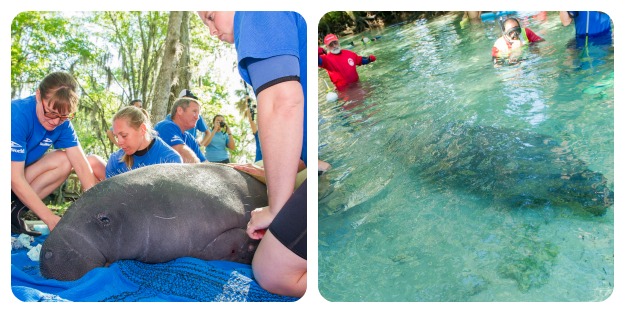 Following her rescue, Magnolia was immediately transported to SeaWorld Orlando for care and rehabilitation. Her treatments included dietary support, antibiotics, blood work, radiographs and wound care. Upon arrival, she weighed 785 pounds and was over 9-feet-long.  She now weighs a healthy 940 pounds, an increase of more than 150 pounds.

So far in 2015, SeaWorld Orlando has rescued 24 and returned 25 manatees back to their natural environment. In collaboration with the government and other members of accredited stranding networks, SeaWorld Parks & Entertainment operates one of the world’s most respected programs to rescue ill and injured marine animals, with the goal to rehabilitate and return to the waters. SeaWorld animal experts have helped more than 24,000 animals in need – ill, injured, orphaned and abandoned – for more than five decades.