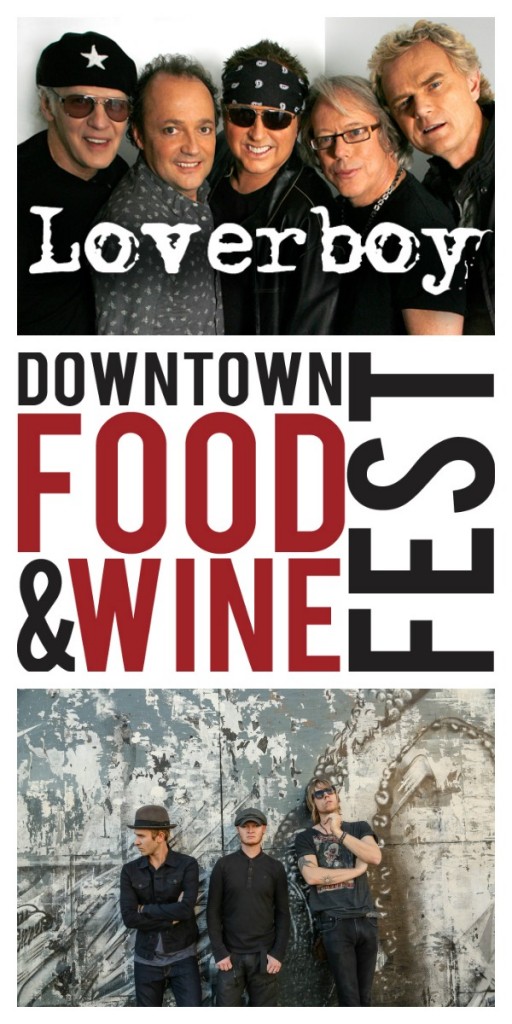 Located in the heart of downtown Orlando at Lake Eola on Robinson Street, the two-day Fest features mouth-watering dishes from 30 of Orlando’s premier restaurants, 50 domestic and international wines and live, national entertainment by Lifehouse and LOVERBOY.

All appearances and entertainment are subject to change without notice.  The complete performance schedule will be updated on www.DowntownFoodandWineFest.com.

On the heels of the announcement of their much-anticipated new studio album, Out of the Wasteland, available this spring, the multi-platinum alt-rock band Lifehouse takes the Fest stage on Saturday evening, February 21.

Out of the Wasteland is the work of a group that has some history. It was 2001 when Los Angeles-based Lifehouse broke through in a big way when “Hanging by a Moment,” from their debut album No Name Face, spent 20 weeks in the Top Ten and won a Billboard Music Award for “Hot 100 Single of the Year.” Since then, the band has released five more albums, sold over 15 million records worldwide and spun off such hit singles as “You and Me,” “First Time,” and “Whatever it Takes.” Lifehouse is one of the most played artists in the history of Hot AC with 1.5 million spins and over 1.4 Billion Pandora Plays to date.

For more than 30 years, LOVERBOY has been “Working for the Weekend” and on weekends, delighting audiences around the world since forming in Calgary, Alberta.  The legendary band takes the Fest stage on Sunday evening, February 22.

With their trademark red leather pants, bandannas, big rock sound and high-energy live shows, LOVERBOY has sold more than 10 million albums, earning four multi-platinum plaques, including the four-million-selling Get Luck and a trio of double-platinum releases in their self-titled 1980 debut, 1983’s “Keep It Up and 1985’s Lovin’ Every Minute of It. Still, “Working for the Weekend,” LOVERBOY’s catalog includes some of arena-rock’s most enduring anthems. LOVERBOY’s reputation as a live act has always been its calling card as the group continues to entertain fans of all ages.

Location:  Located in the heart of downtown Orlando at Lake Eola along Robinson Street

For all-weekend Fest fans, a two-day ticket is available for $25 per person only with advance online purchase.

A limited number of Wine Tasters Club passes will be available for purchase for $15 per person in addition to general admission only with advance online purchase.  Club members will enjoy up to five 2 oz. pours of their choice throughout the Fest and a souvenir lanyard.

Back by popular demand, The Ultimate Fest Experience ticket returns. The Ultimate Fest Experience ticket is $100 per person, per day and includes VIP parking, general admission, Wine Tasters Club, $20 in food and beverage tickets, access to the private stage side pavilion with premium wine selections, access to private restrooms and a commemorative gift.  A limited number of VIP tickets are available with advance online purchase.

The Fest is presented and produced by CBS RADIO Orlando, led by Orlando favorites MIX 105.1, 1059 SUNNY FM, and 101.9 AMP Radio in partnership with the Central Florida Chapter of the FRLA.   A portion of the proceeds benefit the FRLA Educational Foundation.

“Now in its seventh year, the Fest is the perfect combination of divine food, unique wines, and entertainment,” said Leigh Doyle, president-elect, Central Florida Chapter of the FRLA.

“Orlando has emerged onto the national culinary stage with award-winning restaurants and memorable events to showcase the spirit of the City Beautiful.”

For more information on the Downtown Food & Wine Fest:

CBS RADIO is one of the largest major-market broadcast media operators in the United States and the undisputed leader in news and sports radio.  Producing original audio and video content, live events and exclusive programming broadcast via on-air, online and mobile platforms, CBS RADIO reaches more than 72 million consumers nationwide each week.  As a part of CBS Corporation, the division owns and operates 117 radio stations in 27 markets – including the top 10 as ranked by Nielsen Audio – as well as an extensive array of digital assets.  CBS RADIO distributes its programming via AM, FM and HD Radio stations, Radio.com and CBS Local Digital Media apps, making engaging with audiences easier than ever before. For more information, please visit www.cbsradio.com.

About the Florida Restaurant and Lodging Association

FRLA is Florida’s premier non-profit hospitality industry trade association. Our mission is to ‘Protect, Educate and Promote’ Florida’s $76.1 billion hospitality industry which represents 23% of Florida’s economy, $4.6 billion in sales tax revenue, and nearly 1.1 million employees – making it the state’s number one industry. We offer regulatory compliance and food safety training needs (RCS and SafeStaff®); industry developed career-building high school programs (FRLAEF); sponsor the only event in Florida exclusively serving the restaurant and foodservice industry (FR&L Show, October 6-8, 2015 in Orlando); and we safeguard the needs of the hospitality industry by providing legislative advocacy. We represent and serve more than 10,000 independent and household name members, suppliers, and theme parks. For more information, go to www.FRLA.org.