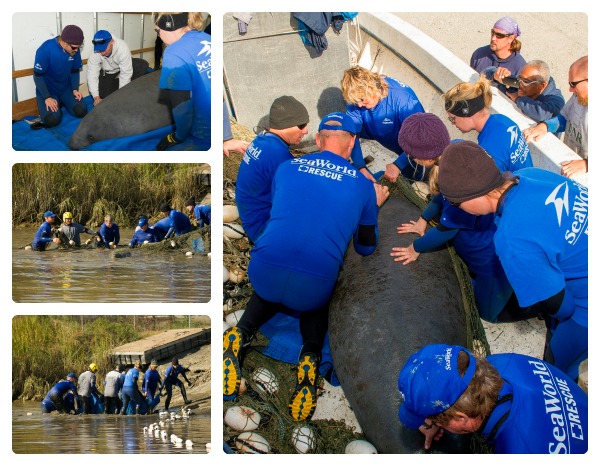 ORLANDO, Fla. (December 16, 2014) – This past weekend, the SeaWorld Orlando Animal Rescue Team traveled approximately 300 miles to Savannah, Ga., to rescue a cold-stressed manatee from the Savannah River. The adult male manatee was successfully rescued late yesterday afternoon by the SeaWorld team, alongside the Georgia Department of Natural Resources and U.S. Fish and Wildlife Service.

The nearly 9-foot-long, 800-pound manatee was transported to SeaWorld Orlando for further rehabilitation and care. Immediately upon arrival, the manatee underwent a full health examination and was given fluids and antibiotics to treat possible infection.

Over the next several weeks, the SeaWorld Orlando Animal Rescue team will closely monitor the manatee’s progress. This is the fourth manatee rescued within the last two weeks. So far this year, SeaWorld’s Animal Rescue Team has rescued 12 manatees and returned nine.

In collaboration with the government and other members of accredited stranding networks, SeaWorld Parks & Entertainment operates one of the world’s most respected programs to rescue ill and injured marine animals, with the goal to rehabilitate and return to the ocean. SeaWorld animal experts have helped more than 24,000 animals in need – ill, injured, orphaned and abandoned – for more than five decades.

The MRP is a cooperative group of non-profit, private, state, and federal entities who work together to monitor the health and survival of rehabilitated and released manatees.  Information about manatees currently being tracked is available at www.manateerescue.org. The endangered Florida manatee is at risk from both natural and man-made causes of injury and mortality. Exposure to red tide, cold stress, and disease are all natural problems that can affect manatees. Human-caused threats include boat strikes, crushing by flood gates or locks, and entanglement in or ingestion of fishing gear.