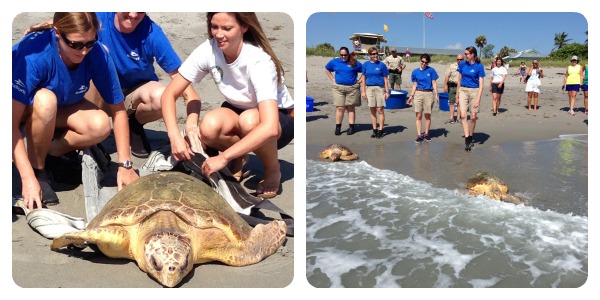 The first sub-adult loggerhead turtle was rescued from the Port St. Lucie Power Plant in South Hutchinson Island, Fla., on March 2, by the Florida Fish and Wildlife Conservation Commission (FWC) and was taken to SeaWorld for care and rehabilitation.  Upon arrival, the turtle was underweight, lethargic, and covered with organisms, a condition known as “Barnacle Bill.”  There was also mild impaction found within the stomach and intestines which was treated with medications and mineral oil.  Since arriving at SeaWorld, this sea turtle gained 10 pounds and weighed 78 upon return.

The second loggerhead turtle was rescued from the Intracoastal Waterway near Jupiter, Fla., on January 19, after being found suffering from buoyancy issues.  At time of return, he weighed 135 pounds and measuring 2.5 feet-long.

The third loggerhead turtle was rescued from the Riviera Beach Energy Center on April 3, with 75 percent of its right front flipper missing and bone exposed.  The turtle received rehabilitative care, including treatment for the wound. This sea turtle was roughly two feet long, and weighed about 52 pounds at time of return.

Throughout their time at SeaWorld, these sea turtles had radiographs, vitamins and antibiotics, as well blood work-ups to help them recover.

The green sea turtle was rescued by a University of Central Florida turtle monitoring group and transported to SeaWorld Orlando by the Sea Turtle Preservation Society. The turtle arrived on March 6 lethargic and thin, and had a previous wound to the left rear flipper.  Upon arrival, the green sea turtle was about a foot long and weighed five pounds. During rehabilitation, this sea turtle received radiographs, antibiotics, had blood work done and was tube fed for a short time. This turtle also received treatments for parasites and additional medications targeting the digestive system. After 10 days, it began eating on its own and has returned to a healthy body condition.

So far in 2014, SeaWorld Orlando has rescued 29 sea turtles and returned 13 back to the water.

In collaboration with the government and other members of accredited stranding networks, SeaWorld Parks & Entertainment operates one of the world’s most respected programs to rescue ill and injured marine animals, with the goal to rehabilitate and return to the waters. SeaWorld animal experts have helped more than 23,000 animals in need – ill, injured, orphaned and abandoned – for more than four decades. Since 1980, SeaWorld Orlando has rescued more than 1,700 turtles and returned more than 1,100.

For more than 45 years, SeaWorld Parks & Entertainment has helped animals in need — ill, injured and orphaned.  More than 23,000 animals have been rescued by our experts. SeaWorld’s animal rescue team is on call 24 hours a day, 7 days a week.