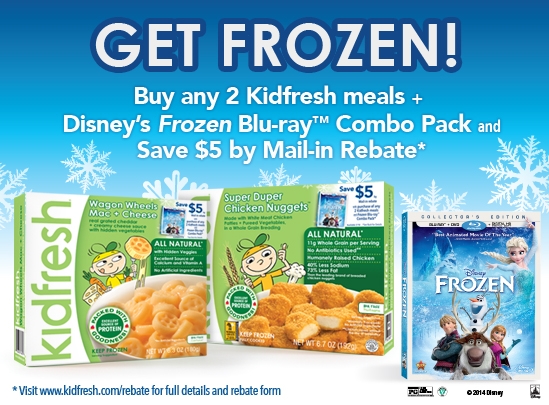 Save up to $6.00 when purchasing two Kidfresh meals and the Frozen Blu-Ray Combo Pack.

Families will be able to save up to $6.00 during this exclusive promotion. Through the purchase of any two Kidfresh meals and the Frozen Blu-ray Combo Pack, parents can save $5.00 by mail-in rebate. In addition, an extra $1.00 off coupon for any two Kidfresh meals will be available at point of purchase in over 2,200 participating retailers, including Stop & Shop, Giant, Kroger, HEB, ShopRite, A&P, Pathmark, and Harris Teeter.

“We are so thrilled about this collaboration with Disney to promote the launch of the home entertainment release of the hit movie, Frozen,” said the Kidfresh CEO, Matt Cohen. “It just makes perfect sense that Kidfresh – with our healthy frozen kids’ meals, and Disney – with such a wonderful hit movie as Frozen, would collaborate during Frozen Food Month.”

The Frozen Blu-ray Combo Pack will be available for purchase in all major retailers nationwide including Best Buy, Walmart, Target and Kmart.

Limit one (1) rebate per household. The Frozen Blu-ray Combo Pack will be available for purchase on March 18, 2014. Offer expires May 15, 2014. Void where prohibited. Only valid in the U.S.A. For complete promotion details including the rebate form, visit http://www.kidfresh.com/rebate/

***WIN*** One lucky reader is going to win 2 FREE Kidfresh coupons so you can try these delicious foods. Just enter my Rafflecopter below!

Coupons: Visit the Kidfresh facebook page and “LIKE” them for a $1.00 off coupon! Score another $1.00 off mobile coupon here.

Instagram Contest: Just follow Kidfresh on Instagram and upload a picture of your kids eating Kidfresh meals and/or watching Disney’s Frozen Movie, tag @Kidfreshfoods and include the Hashtag #FrozenKidfresh and you’ll be entered to win a Kidfresh + Disney Frozen Prize pack.

Disclosure: I received FREE Kidfresh coupons. No additional compensation was received, all opinions are mine.