A male manatee was rescued February 18th from the Tomoka River near Ormond Beach, Fla., after suffering from symptoms caused by cold stress. The Florida Fish and Wildlife Conservation Commission (FWC) rescued the manatee from shallow, chilly water, and then brought him to SeaWorld Orlando for rehabilitation and care.

The 650-pound, 8-foot-long manatee was given a complete health exam this morning, including a blood test, treatment for sores caused by cold stress and fluids to help with dehydration.  Over the next couple of days, the manatee will continue to receive around-the-clock care, as well as regular tube feedings to rehydrate him and determine his well-being. 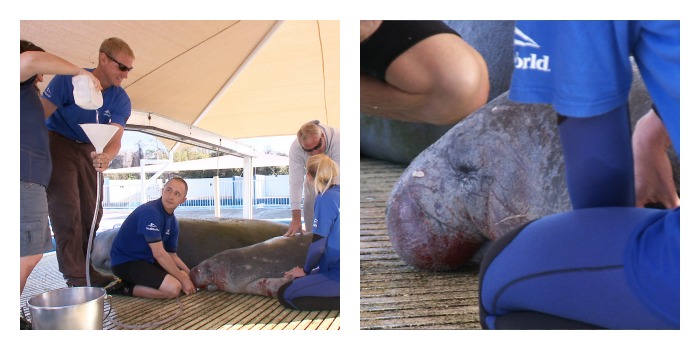 The goal, as with every rescue, is to return the manatee back to his natural environment once he’s strong enough to survive on his own.

In collaboration with the government and other members of accredited stranding networks, SeaWorld Parks & Entertainment operates one of the world’s most respected programs to rescue ill and injured marine animals, with the goal to rehabilitate and return to the ocean. SeaWorld animal experts have helped more than 23,000 animals in need – ill, injured, orphaned and abandoned – for more than four decades.