What: The Advance Auto Parts MONSTER JAM® makes its return to the Orlando area when the annual motor sports spectacle drives into the Florida Citrus Bowl Stadium. The Monster Jam is one of Orlando’s most popular and largest single day stadium events, attracting capacity crowds of over 60,000 fans. A huge field of sixteen monster trucks will compete in side-by-racing and the fan-favorite freestyle competition. One of the many highlights of this year’s event is the 10th anniversary of the sport’s 10-time World Champion Maximum Destruction. (Check out Maximum Destruction’s incredible freestyle run from last year’s Orlando event that took home the win and was voted 2012 Freestyle of the Year… view the highlight video here: http://www.youtube.com/embed/tqM3kxDJWkw

Tickets are on sale now at all Ticketmaster outlets, the Amway Center Box Office, or charge by phone at 800-745-3000 or ticketmaster.com. Tickets will also be available day of show at the Citrus Bowl.  All seats reserved. Subject to facility fee, plus convenience and handling charges. Don’t wait – buy tickets in advance as prices go up $5 more day of show. Get more show information at www.MonsterJam.com (click on “Tickets” and search for Orlando January 26th). 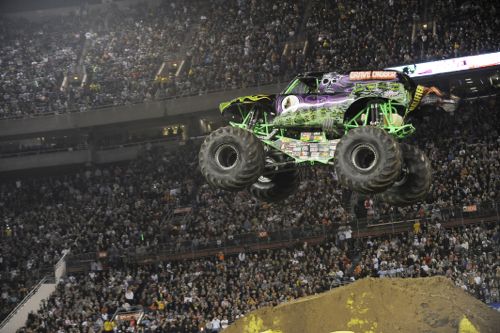 Show Details: Central Florida will heat up this January when 1,500 horsepower, 10,000-pound monster trucks compete in side-by-side racing and the fan-favorite freestyle competition where each monster truck gets up to 120 seconds to “wow” the crowd with huge jumps, wheelies, truck-spinning donuts, flips, and the destruction of cars, vans, buses, motor homes and more.  Four-time World Champion, Dennis Anderson, returns to his favorite city driving the legendary monster truck he created 31 years ago, GRAVE DIGGER.  After touring with his oldest son Adam in 2012, Dennis will bring another Anderson with him to Orlando in 2013 with the debut appearance of SON OF A DIGGER driven by Anderson’s middle son, Ryan Anderson. (Ryan became a YouTube sensation in 2011 when he completed a perfect monster truck back flip at the Advance Auto Parts Monster Jam World Finals in Las Vegas. Check out the video: http://www.youtube.com/watch?v=CCc0MAWL4tY.)

Preview Fans can go behind the scenes, meet the drivers for autographs and photo ops, and see the monster trucks up close at the World’s Ultimate Pit Party at Tinker Field from 2-5 pm.

Contests: Purchase a pit pass for only $10 more when making your ticket purchase, or pick up a free pit pass at participating Orlando area Southern Ford Dealers beginning January 2nd.  Pit Passes, along with a valid event ticket, get fans into the Pit Area.

Fans can also go for a ride in a real monster truck before the show by picking up a free Monster Truck Ride Pass at any Advance Auto Parts location from 1/7/13-1/25/13 while supplies last. Monster truck rides begin at 1 p.m. in the lot across from Gate D and run until 7 p.m. Valid only with a Saturday, January 26th event ticket.

Save $15 and get a FREE SuperValue Ticket with a Buy 3 Get 1 SuperValue Ticket FREE Deal. Pick up your free 4-Pack Ticket Voucher from participating Orlando Area MetroPCS Locations from 1/7/13 through 1/25/13 while supplies last. See Voucher for details.