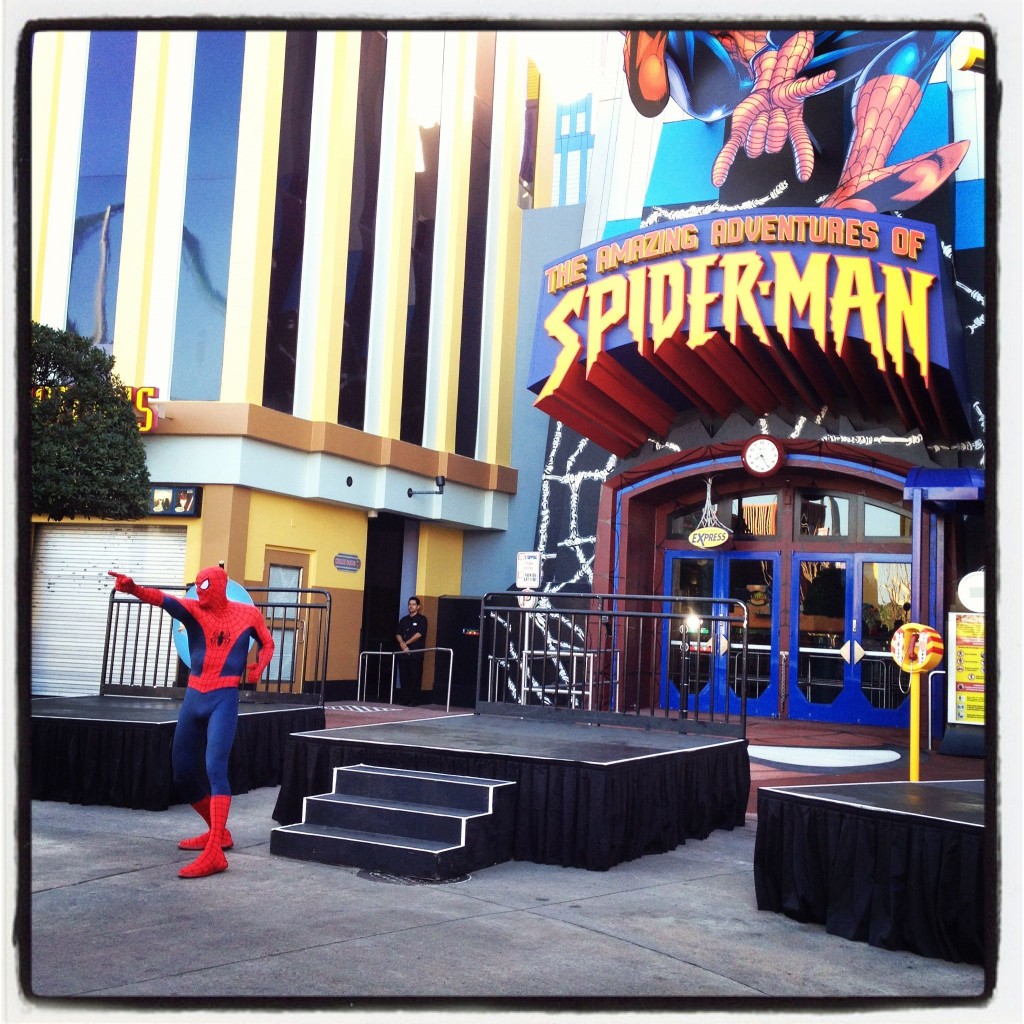 How did your morning begin? Mine started with a front row view of the reopening ceremony for The Amazing Adventures of Spider-Man at Islands of Adventure. 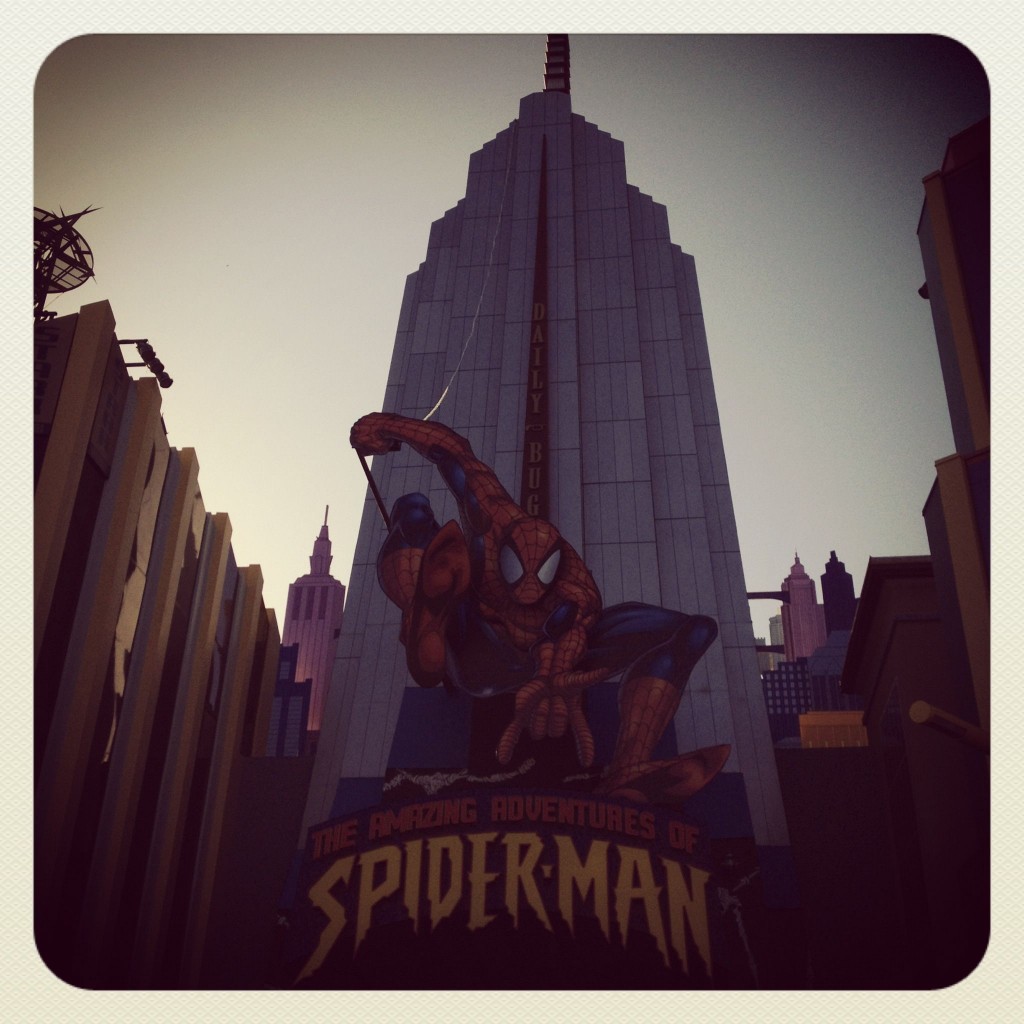 Typically, I am NOT a morning person but today, I couldn’t wait to jump out of bed and drive to the theme park for this special ceremony. My kid was beyond excited, he “claimed” he was going to ride but I had my doubts since he is not a fan of dark rides. I used some good old-fashion bribery and told him he could pick out ANYTHING in the Spider-Man store AFTER we rode the ride. 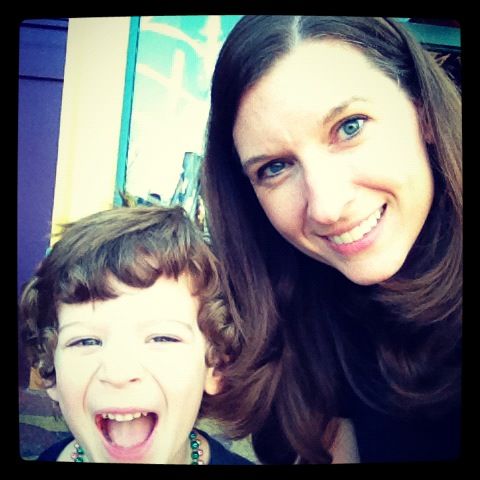 Now, back to the ceremony!

To my right was an entire class with their faces painted to resemble the one and only Spider-Man. They were later called front and center to countdown the official opening (and of course they were the first to experience the new ride and provide feedback to the media). 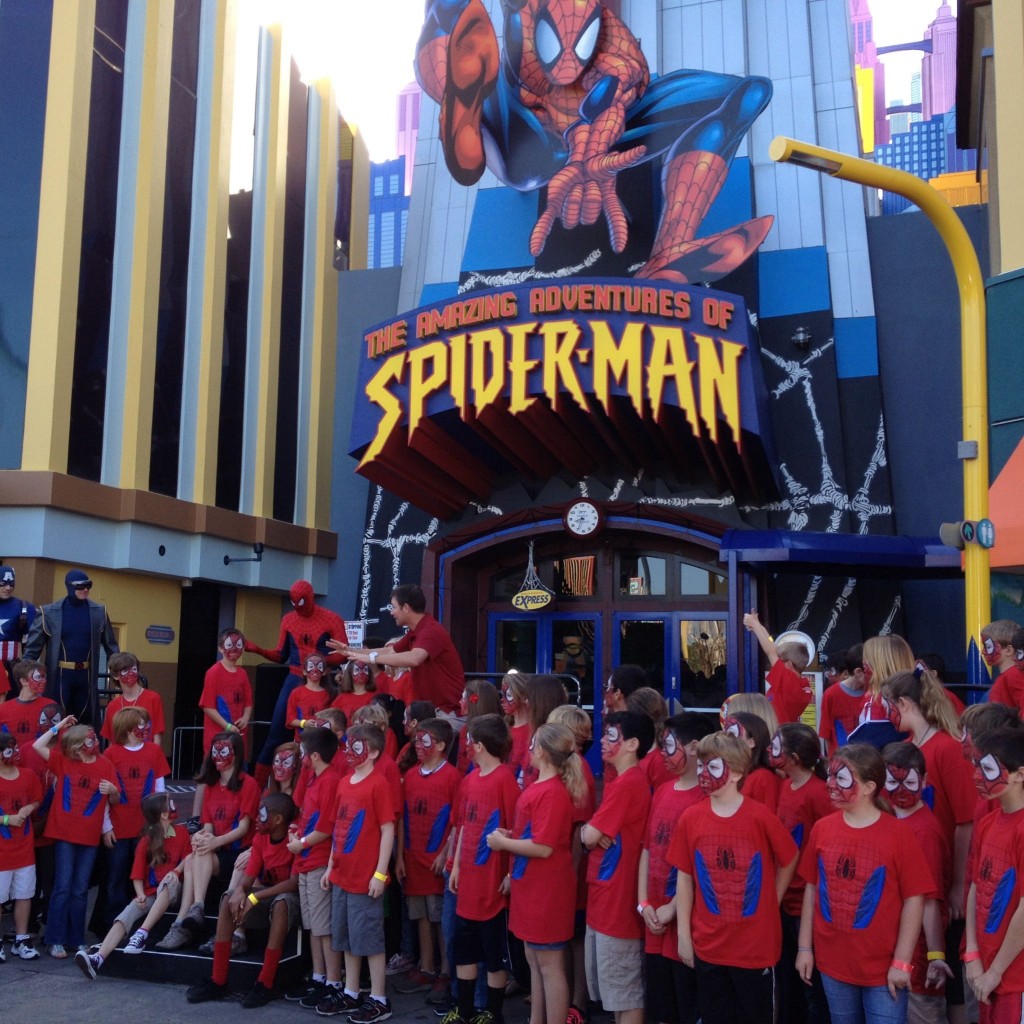 These little people were beyond excited, it was so cool to witness their enthusiasm. Villains were causing havoc, especially with the miniature spider-man clones. 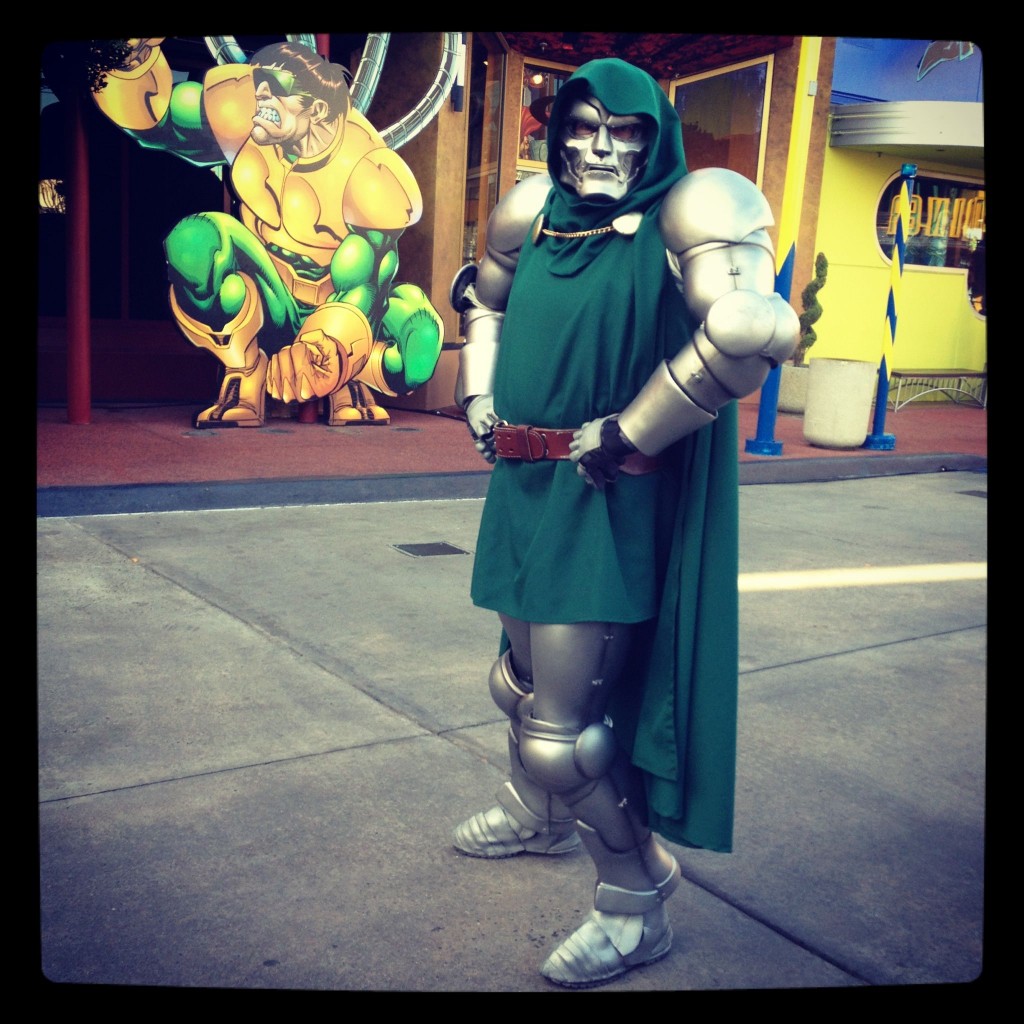 On our left, reporters and members of the media had their cameras and video tapes rolling as the confetti flew signaling the official opening! Excitement was in the air! Spider-man and his friends stood at the entrance and welcomed his biggest fans as they entered the attraction. 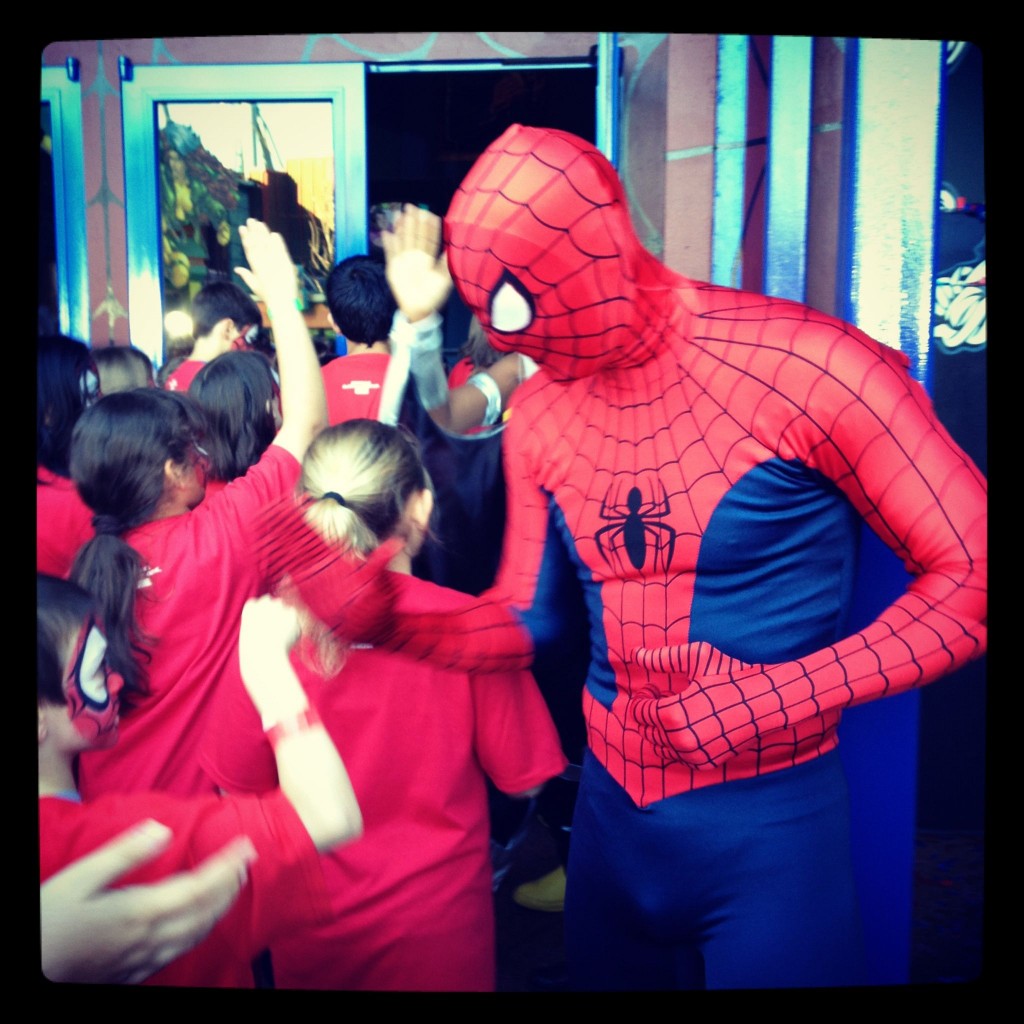 We stopped for a quick Kodak moment, but unfortunately our Spider-man picture turned out blurry. But, I did capture a nice one with Captain America! 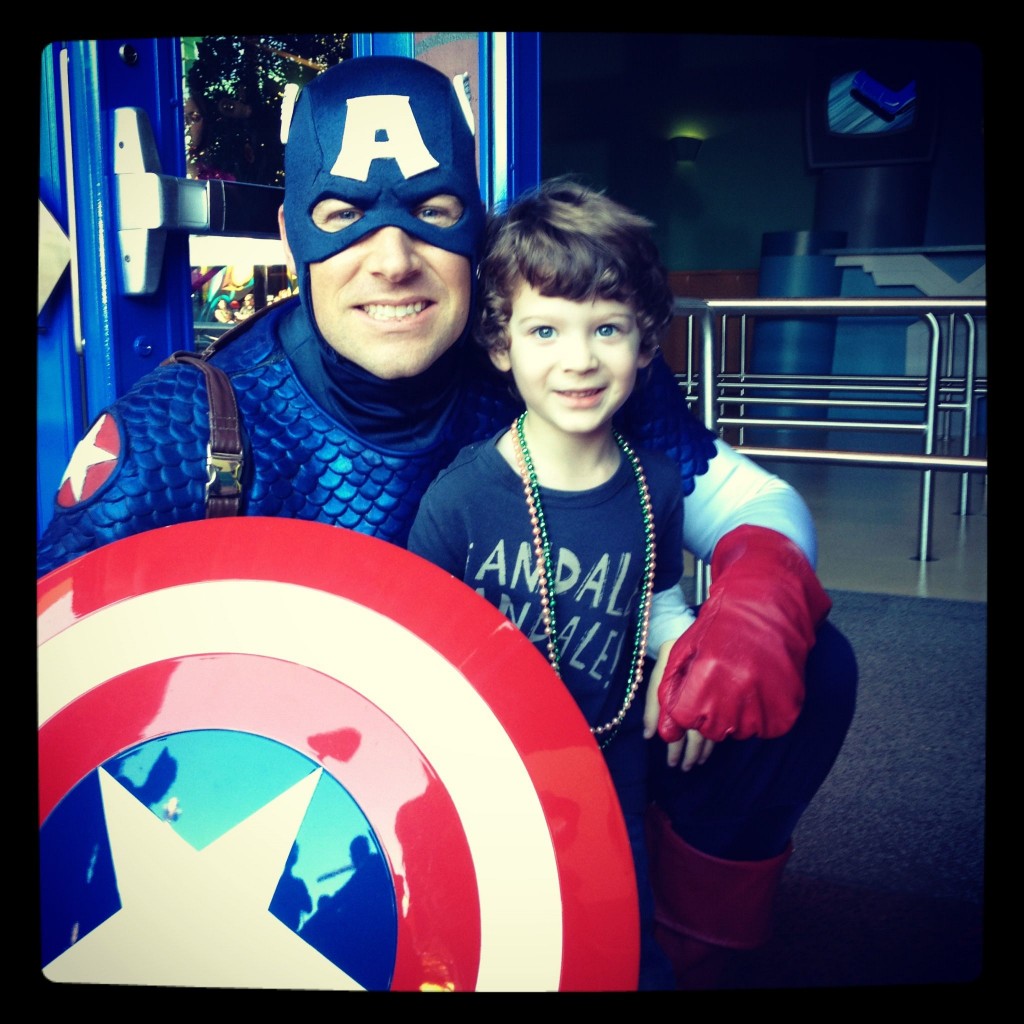 We walked through the attraction and here is what we saw. The kids were fist pumping and chanting, they couldn’t wait to ride. It was simply awesome! 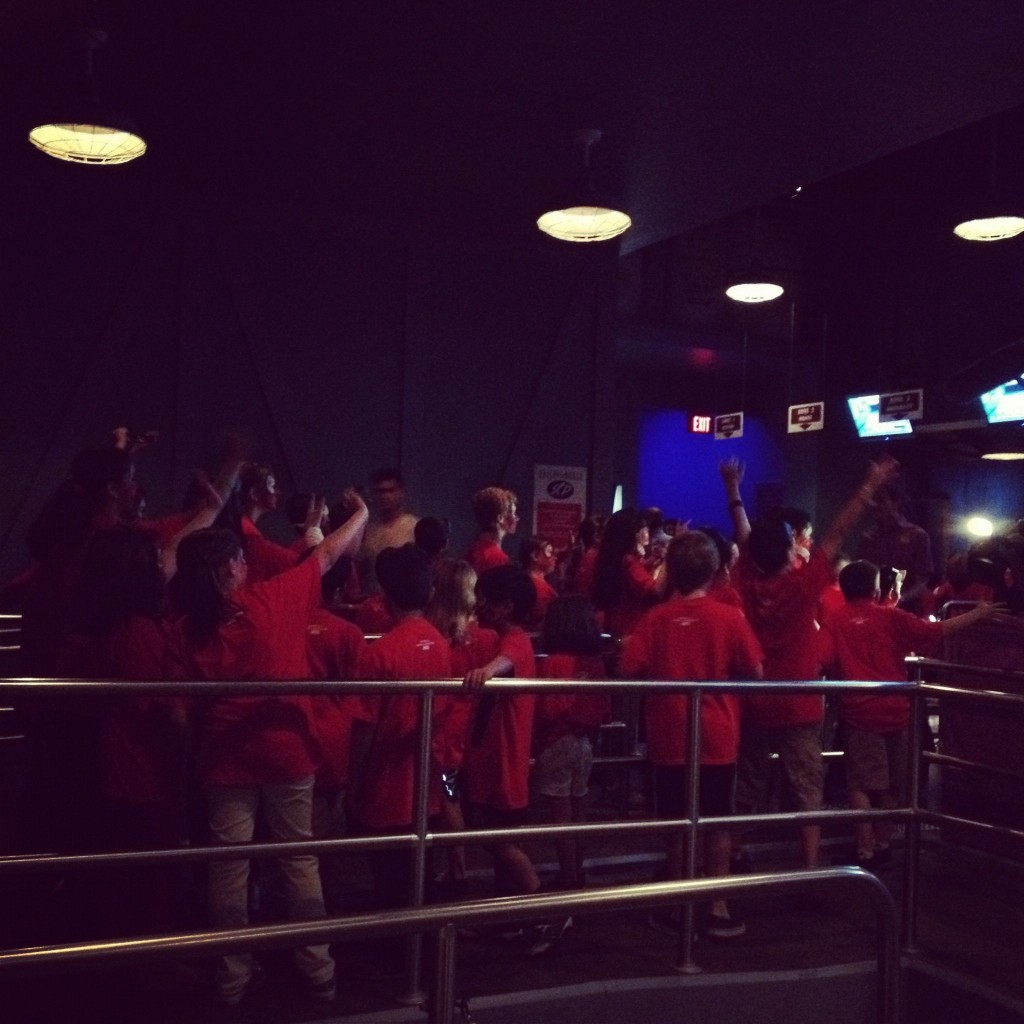 We made it all the way to the 3D glasses and I thought we were actually going to ride. 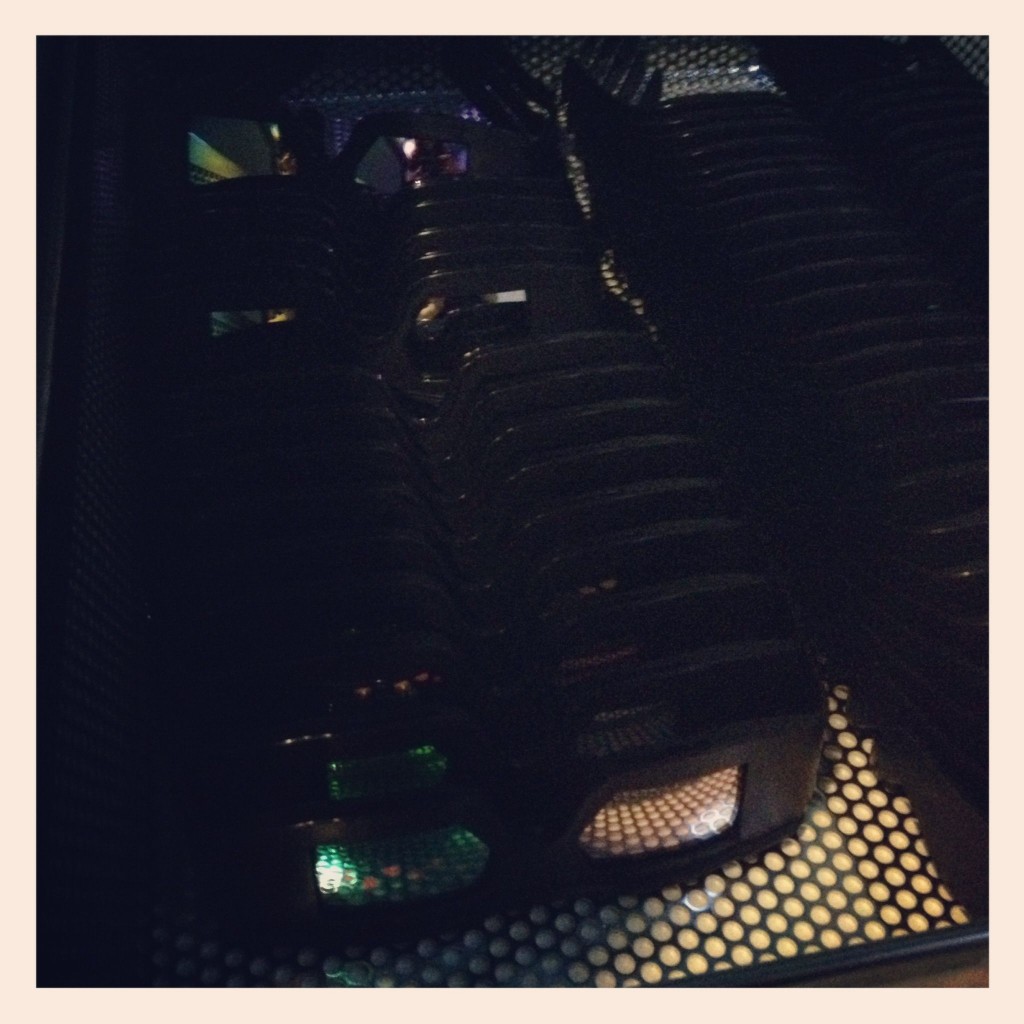 But then, my kid stopped dead in his tracks and said “no mommy, it’s too dark“. I didn’t try to convince him it wasn’t going to be dark because I knew the attraction would most likely terrify him. I simply asked him to model the new glasses so I could take his photo, this is the look he gave me… 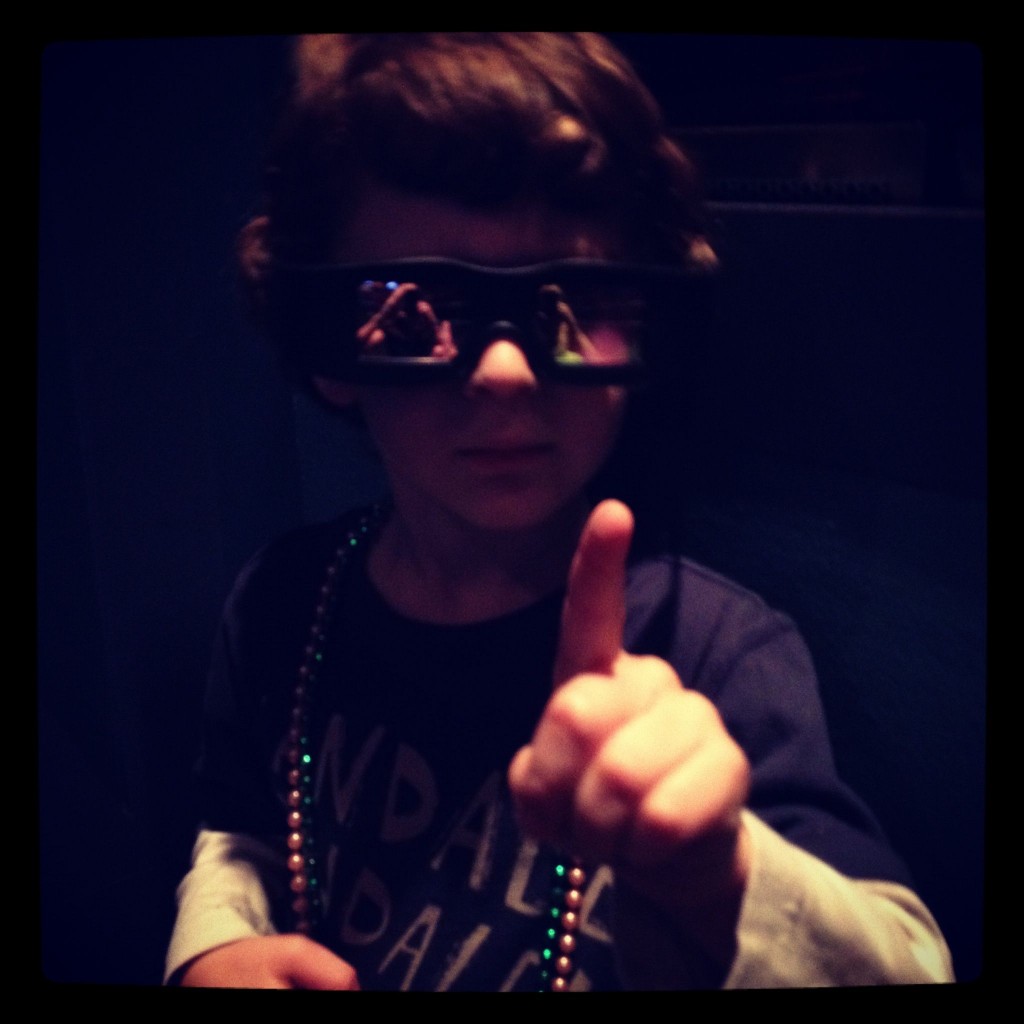 So, I decided to give them a try. They definitely fit comfortably on my face. 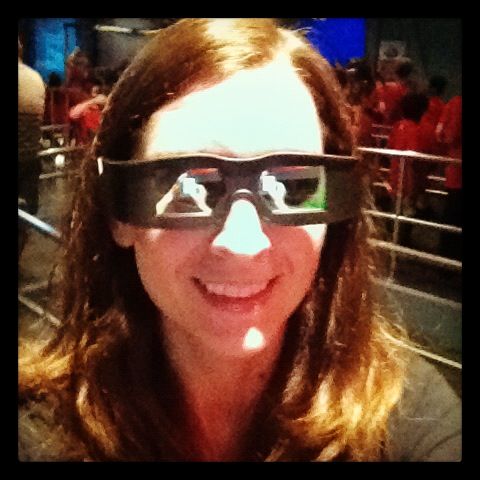 I quickly noticed an Exit sign where the children were getting on the ride, so we snuck out. On our way out, we checked out the child swap area. I wish my husband could have joined us so I could have experienced the ride first-hand. 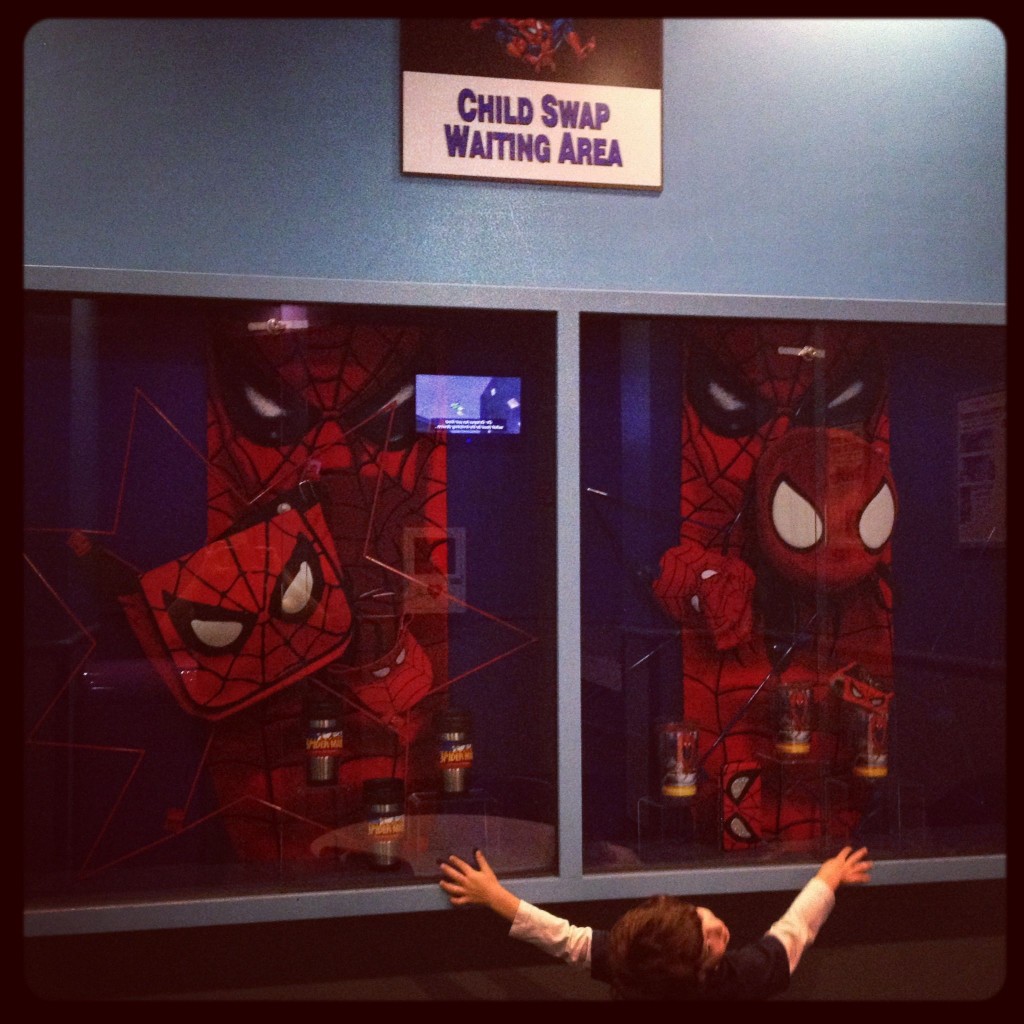 This was the scene when we exited, the children were being interviewed about the new ride. I kept hearing “wow” from everyone who experienced it. I asked a few riders what they thought and all agreed, the new enhancements really made a difference and definitely enhanced the ride experience. They also said my little guy would have been terrified since the villains were totally in their faces, so I’m glad he chickened out at the last minute. 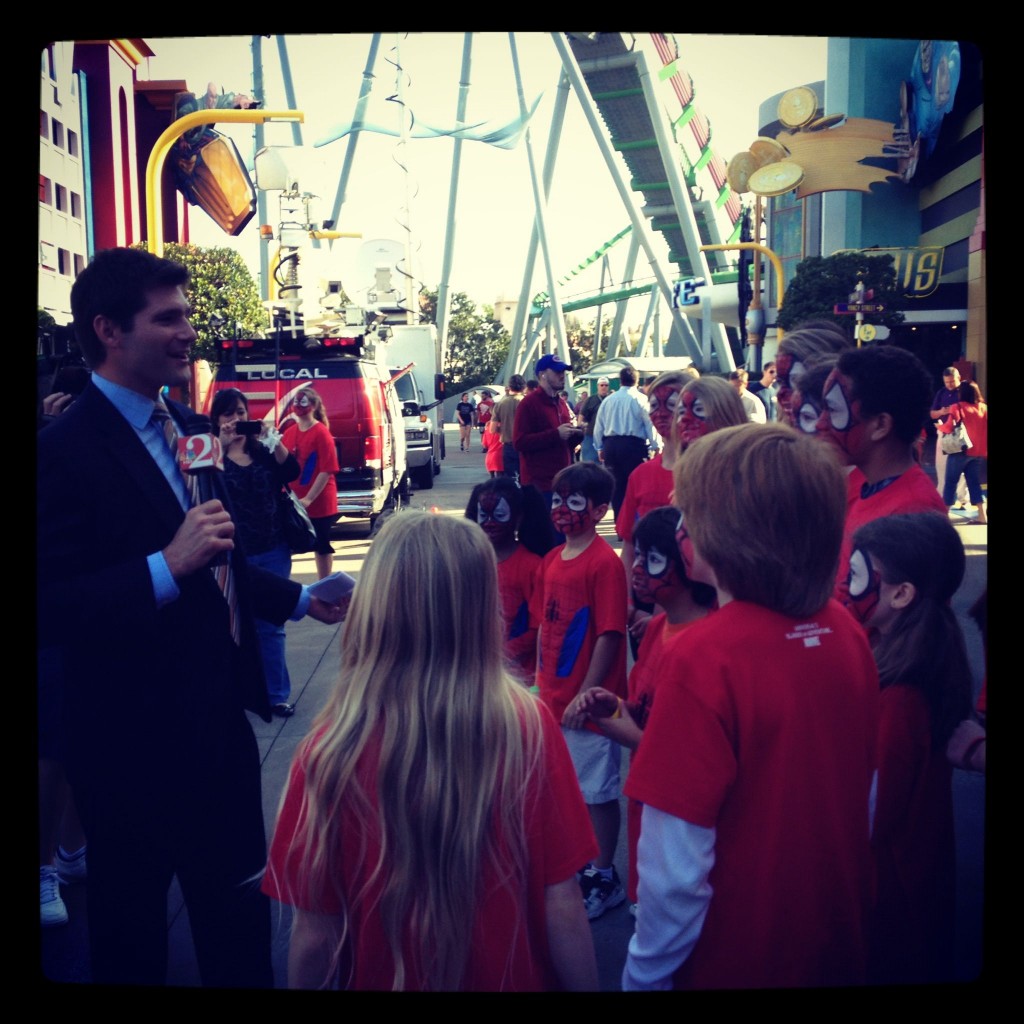 So why all the hype? Well, because this already AMAZING ride was revamped and it is now mind-blowingly better!

The attraction reopened this morning with all-new 4K digital high-definition animation, a new highly-sophisticated Infitec 3-D projection system, a new music score and new high-tech 3-D glasses so that guests can experience the improvements the way the attraction’s creators envisioned. The attraction’s sets, audio system and lighting have also been upgraded.

So what does that mean exactly?  That you are in for the ride of your life! The new animation comes to life across the attraction’s towering visual spaces – some of which are more than four stories tall and just as wide. Live special effects such as heat blasts and water surges as well as the motion of the ride vehicle are precisely calibrated to match the animation so that riders will feel as if the entire adventure is happening to them.

As they reanimated the attraction film, the creative team added hundreds of new details and effects. Guests will see moss swaying in the wind, rats scurrying through the streets and hear electricity arching so close it will raise the hair on the back of their necks. And for the first time ever, Spider-Man co-creator Stan Lee will make a cameo appearance inside the attraction. Lee was meticulously animated in 3-D and placed in more than one scene inside the new animation.

“The Amazing Adventures of Spider-Man was so wonderful before,” said comic book icon and Spider-Man co-creator, Stan Lee. “But now – with all of the new technology that’s been added – it is indescribably spectacular.”

“We took an incredible theme park ride experience and made it even better,” said Thierry Coup, senior vice president of Universal Creative. “If you have been on this attraction before, then it will seem like the first time. If you have never been on it, then you will simply be blown away.”

Here are the top 10 unique new elements in The Amazing Adventures of Spider-Man: