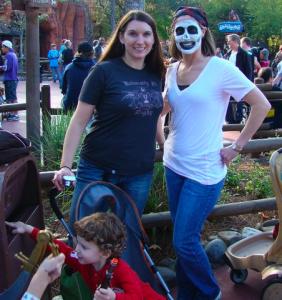 Last week, I met up with a long time friend that I have not talked to since high school. Where else would I catch up on 15 years of gossip memories except the Magic Kingdom? She was visiting Disney World with another girl who had a six year old son. Before catching up with them, they had a pirate makeover which just added to the many laughs of the day!

My son was in heaven, another kid to run around the park with! They became instant friends and took off hand-in-hand to explore. I’m know this was one of my son’s best Disney visits ever since he had a little friend to explore with – oh and not to mention a LOT of time outside the stroller! When it’s just the two of us, I keep him confined as much as possible because I know what a nightmare it is to get him back into the stroller once he has a taste of freedom. 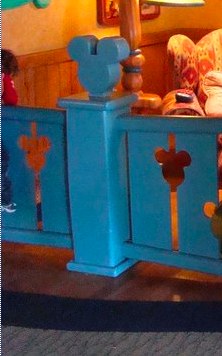 We entered Mickey’s house and it was surprisingly quiet compared to the long line at Minnie’s house. As you all know, my son is a huge Mickey fan and well, this was the first time he had ever been able to walk around by himself. Our friends were snapping photos and all of the sudden I realize my son is trying to grab Pluto’s bone out of his dog bed. Sure enough, before I have time to grab him an alarm sounds. All eyes were instantly on my son, it was so embarrassing! But, everyone learned a valuable lesson…do NOT touch anything in Mickey’s house or the alarm of shame will sound.

Notice the photo on the left, I cropped it so you can see for yourself (there is my child hanging off the fence on the left side)! My friends were snapping pictures and just so happened to catch the little thief in the act!

Also, in the top photo – notice how he wants to play in the trash can. Sigh! Needless to say, we used tons of antibacterial gel and wipes that day! Boys will be boys.