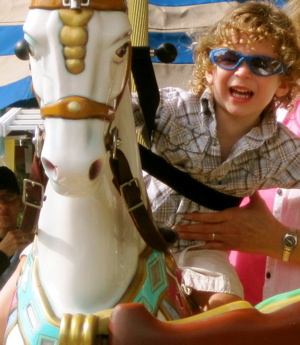 My son has an ear infection, GRRRR! I could tell he was being fussier than usual. I still wasn’t convinced though, thought perhaps his 2 year molars were causing him discomfort or he was coming down with a cold. My parents were visiting (hence why my blog was so quiet) and unfortunately, they had to listen to the fuss. I tried explaining that he is usually very pleasant, so I hope they  do not think he is this brat all the time!

Anyway, we took him to the Downtown Disney MarketPlace and he begged to get on the carousel. The second it started moving, the screamfest began. The red flag went up immediately, it was at that very moment I knew something wasn’t right. My kid would NEVER cry at Disney and especially NOT on the carousel.

I decided to take him to see his pediatrician. Well, we didn’t get to see one of our usual doctors, instead we saw “Lucifer”. I am baffled how this woman is a pediatrician because she appeared to hate children and did nothing whatsoever to warm up to my son. Instead, she immediately called for a nurse to pin him down so she could look inside his ears. This attempt is not necessary, or at least not with his usual doctors because they engage him and he cooperates. I truly believe if I wasn’t in the room, she would have hit my son over the head with a sledge hammer to knock him out before trying to be nice. I am hoping she was just having a bad day and since we were  the last appointment, she was just eager to go home.

Once the exam was over and my traumatized child was near vomiting from wrestling with the nurse, it was confirmed. His left ear was very red and infected while the right one had fluid on it. He is taking Augmentin for 10 days, then we have a follow-up appointment (obviously, I will beg to see one of our regular doctors).