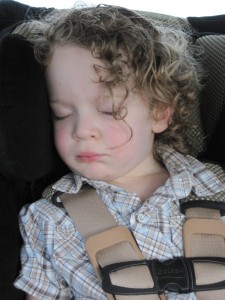 It has been a rough couple of days with my child refusing to nap, so I have been determined to do whatever it takes to make him sleep! As I mentioned last week, I took him to the Magic Kingdom and thought I wore him out to the point of exhaustion. The plan backfired, the only person exhausted and wanting to nap was me! But, that didn’t happen because my kid was running around with endless energy.

This weekend, my husband and I both tried to enforce nap time. Saturday, we were unsuccessful. After playing in his crib for an hour, we finally let him out. On Sunday, we took him to the Animal Kingdom. It was hot, humid and miserable. We stayed for over 3 hours and needless to say, my son was exhausted. He fell asleep the second he was strapped in his car seat. I didn’t have the heart to wake him even though I knew sleeping in the car meant there was NO CHANCE of him taking a nap at home. Just look at how peaceful he was!