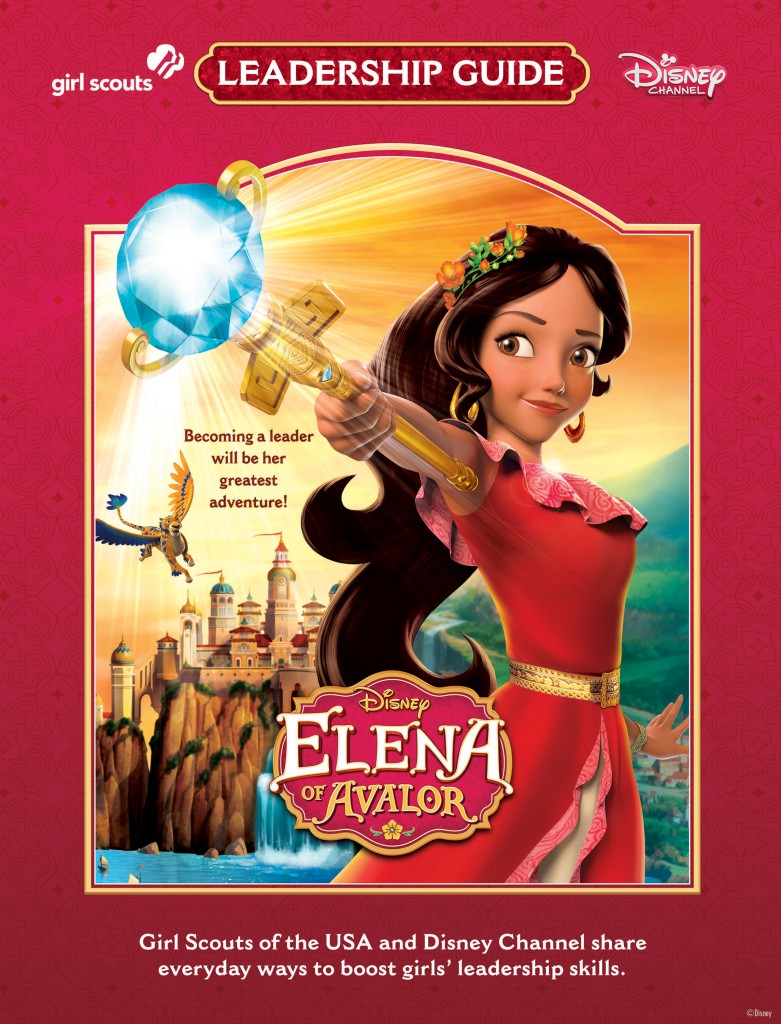 Girl Scouts of the USA and Disney Channel Team Up to

Girl Scouts of the USA (GSUSA) and Disney Channel are teaming up to inspire girls and their families to practice leadership. The collaboration brings GSUSA’s focus on leading like a G.I.R.L. (Go-getter, Innovator, Risk-taker, Leader)TM, the Girl Scout way, and Disney Channel’s recently launched animated television series Elena of Avalor into action with the debut of The Elena of Avalor Leadership Guide by Girl Scouts and Disney Channel. Available in English and Spanish beginning today, the Guide showcases leadership activities and conversations parents and caregivers can engage their preschool through fifth-grade girls in to boost their everyday leadership skills and prepare them to create the future they imagine.

“Since 1912, Girl Scouts has proudly fostered a tradition of excellence that prepares girls, with the support of their families, to boldly take the lead in their lives in the ‘Girl’ Scout way,” said Sylvia Acevedo, interim CEO of Girl Scouts of the USA. “Recognizing that leadership development for youth begins early-on, we are particularly excited to work with Disney Channel on this collaboration tied to Elena of Avalor, a wonderfully innovative program that emphasizes the importance of embracing the mantle of leadership to a new generation. Because, as we say at Girl Scouts, ‘If the world needs more leaders, then we need more Girl Scouts!’”

Studies show early experiences in life impact leadership potential, and the family setting is the first place a child learns about how to be a strong leader.1 As uncovered by the Girl Scout Research Institute (GSRI), the disconnect between the command-and-control definition of leadership and the more aspirational types of leadership points to potential pitfalls in communicating with girls about the benefits of leadership development programs2. Additionally, girls are not confident about having the essential skills and competencies they think of as most important for a leader2. GSUSA, with its established legacy in preparing girls to be leaders, believes in a holistic approach to leadership, which is a key component of the new leadership guide.

“As we launch Elena of Avalor on Disney Channel, nothing is more important to us than using the impact that we know television has on our audience to showcase strong, ambitious role models for young girls. Our work with GSUSA will give us the chance to amplify that message and be a part of the largest community of young female leaders, by providing materials and inspiration that demonstrate every girl has the power to lead,” said Nancy Kanter, executive vice president, Original Programming and General Manager, Disney Junior Worldwide.

Also debuting is the inaugural “Elena of Avalor—Scepter of Light Award,” which will be presented to two Girl Scout Gold Award recipients. The Gold Award is the highest recognition a Girl Scout can earn, with recipients demonstrating extraordinary leadership through “Take Action projects” and exemplifying compassion, critical thinking, collaboration, and courage—the very leadership qualities that Elena of Avalor models. Award recipients will participate in events including Elena’s Royal Welcome at Walt Disney World in Orlando this August and a GSUSA event in Chicago in the fall.

Later this year, as part of Disney ABC Television Group’s Be Inspired pro-social efforts, Disney Channel and Disney Junior will air leadership-themed pro-social interstitials featuring Girl Scouts alongside Princess Elena, as well as kick off a user-generated contest encouraging girls to share how they exemplify being a G.I.R.L. on International Day of the Girl (October 11) and give them the opportunity to be featured on air.

Disney’s Elena of Avalor follows the story of Elena, a brave and adventurous teenager who saves her kingdom from an evil sorceress and must learn to rule as crown princess until she is old enough to be queen. Set in Avalor, an enchanted fairytale kingdom inspired by diverse Latin cultures and folklore, Elena’s journey will lead her to understand that her new role requires thoughtfulness, resilience, and compassion, the traits of all truly great leaders. The series airs Fridays at 7:30 p.m. EDT on Disney Channel.

We’re Girl Scouts of the USA

We’re 2.7 million strong—1.9 million girls and 800,000 adults who believe girls can change the world. It began over 100 years ago with one woman, Girl Scouts’ founder Juliette Gordon “Daisy” Low, who believed in the power of every girl. She organized the first Girl Scout troop on March 12, 1912, in Savannah, Georgia, and every year since, we’ve made her vision a reality, helping girls discover their strengths, passions, and talents. Today we continue the Girl Scout mission of building girls of courage, confidence, and character, who make the world a better place. We’re the preeminent leadership development organization for girls. And with programs for girls from coast to coast and across the globe, Girl Scouts offers every girl a chance to do something amazing. To volunteer, reconnect, donate, or join, visit www.girlscouts.org.