A female southern white rhinoceros calf was born at Busch Gardens® Tampa October 16. The calf is healthy and is currently being cared for by mom with the Busch Gardens animal care team watching closely. 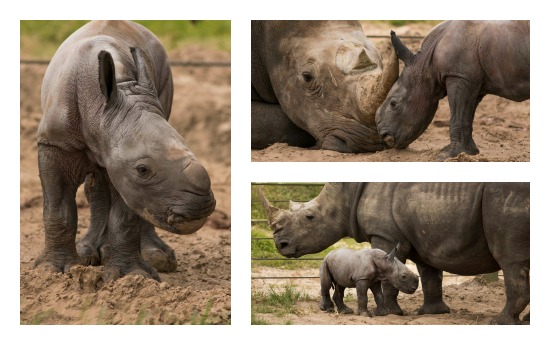 Newborn white rhinoceros usually weigh about 150 pounds and can gain four pounds every day for the first year. White rhinos are the second largest land mammal after the elephant, and can weigh as much as 5,000 pounds when fully grown.

The southern white rhinoceros is classified as a near-threatened species with just over 20,000 left in the wild, according to the International Union for Conservation of Nature and Natural Resources (IUCN).

Kisiri is an experienced mother. She has had two successful births previously.  The father, Tambo, has been very attentive to, and gentle with, his previous calves and the zoological team expects him to behave similarly with this calf.

Multiple cameras were installed around the birthing area, allowing caretakers to keep an even closer eye on mom Kisiri and record the calf’s first moments. Fans can watch the video online here.

Kisiri and her calf are continuing to be monitored by the animal care staff in the birthing area and are expected to join the rest of the southern white rhinoceros herd on the Serengeti Plain in a few weeks. Guests can try to catch a glimpse of mom and her calf by booking a Serengeti Safari.

Kisiri’s calf is part of Busch Gardens’ participation in the Association of Zoos and Aquariums’ (AZA) Species Survival Plan® (SSP). The mission of the SSP is to cooperatively manage specific species populations within AZA-accredited facilities.

The SeaWorld & Busch Gardens Conservation Fund has granted more than half a million dollars to specifically help rhino conservation and more than $11 million to conservation projects around the world since its inception in 2003. The Fund was created by SeaWorld Parks & Entertainment and is a registered 501(c)(3) non-profit charitable foundation dedicated to supporting environmental initiatives, wildlife conservation and animal rescue.

Busch Gardens is owned and operated by SeaWorld Parks & Entertainment®, one of the world’s foremost zoological organizations and a worldwide leader in animal welfare, training, husbandry and veterinary care. The company collectively cares for one of the largest animal collections on the North American continent and has helped lead advances in the care of species in zoological facilities and in the conservation of wild populations.