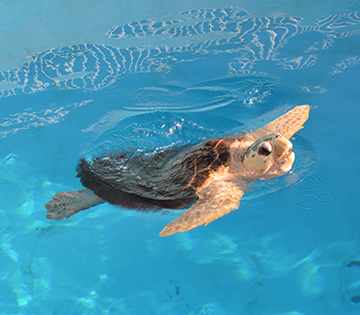 On November 23, 2013, Ozzy was found entangled in fishing line and rope from a crab trap in open water off of Pasco County. The entanglement caused a severe laceration and broken bone in her right front flipper, which resulted in her immediate transportation to CMA for treatment. Through Thermocam assessment and Platelet Rich Plasma therapy, she regained her strength under the watchful eye of the turtle team. After passing several veterinary tests to assess her deep water swimming and ability to hunt for food, Ozzy was cleared for release.

In partnership with the Sea Turtle Conservancy (STC), CMA has purchased a satellite tag to monitor Ozzy after her release.  This is the first time that CMA has ever utilized this type of technology for one of their released animals, which is much more sophisticated than the usual pit or flipper tags. The tag will allow the aquarium team to observe swimming behavior and migration patterns in the wild. This is the same system used by “Tour de Turtles”, an STC program that logs the travel patterns of wild sea turtles. (www.tourdeturtles.org).

The cost for the tag is $5000. As the tag continues to transmit information over the next 7 months, additional costs will be over $5,000. To support Ozzy’s journey, sea turtle fans can donate at www.seewinter.com/ozzy and watch her release live on Periscope by following @CMAquarium.