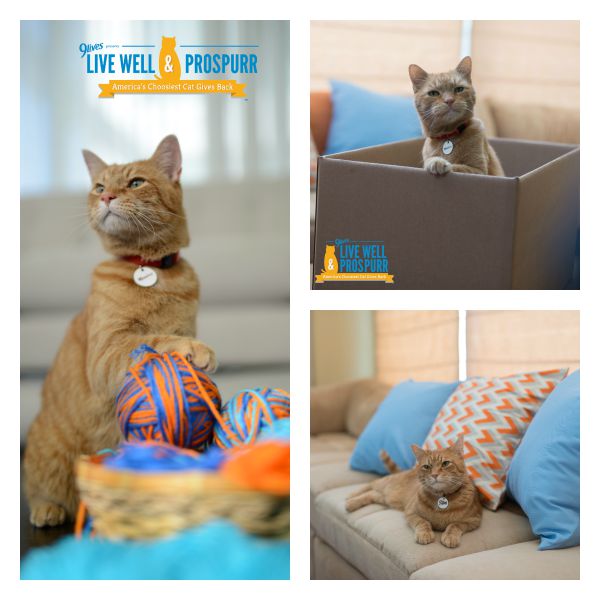 Morris the Cat is known throughout the world as the star of over fifty 9Lives cat food commercials from the 1970s up through today. He gained even greater notoriety when he became an advo-cat for kitty adoptions with his “Million Cat Rescue” initiative, and just this year, he took a trip to South by Southwest as a feline technology correspondent.

It seems America’s favorite ‘charmingly choosy’ feline is always on the go, but I recently had the chance to catch up with him to talk show biz, naps, and how he’s giving back through his new effort called ‘Live Well & Prospurr.’

You’ve been a TV star since the 1970s and yet you look as vivacious as ever. How do you keep your youthful glow?

People ask me all the time if I’ve had work done. But in fact, my whiskers stay perky thanks to a disciplined regimen of napping, sleeping, napping some more, eating (9Lives, of course), and just generally hanging out. I want to emphasize this last one because even though it’s categorically important for our health and happiness, it’s also the easiest to forget as we go about our busy lives. That’s why I developed my Official Guide to Relaxing, Chillin’, Unwinding & More. (I had to take some time away from hanging out to write it, but I hope you’ll agree it was well worth it.)

Are humans allowed to know what’s in this guide or is it for felines only?

Oh no, the guide was written for all species, both two- and four-legged. And let’s face it, cats are pretty good at hanging out already. I know relaxing can be daunting—what with work, kids, errands, and chores—but that’s why I created the 5 levels of hanging out. Even the most stressed out person can master Level 1: Kicking Back. Then, as people get more comfortable with the idea of just relaxing, they can move on to the higher levels and ultimately achieve what I like to call Prospurr.

How does someone know when they’ve achieved Prospurr?

Excellent question, Jessica. Prospurr is the Holy Grail of hanging out. It’s not so much an action as a state of mind, but purr-haps I could describe it best like this: It’s like the moment you flop onto the couch after a hard day, mixed with the tingling sensation of getting scratched behind the ears, rolled into the drool-inducing taste of a bowl of 9Lives. You humans out there probably haven’t tried 9Lives, so you’ll just have to trust me on this one. For more tips on hanging out, go to this website that I built with my own four paws: www.prospurr.9lives.com 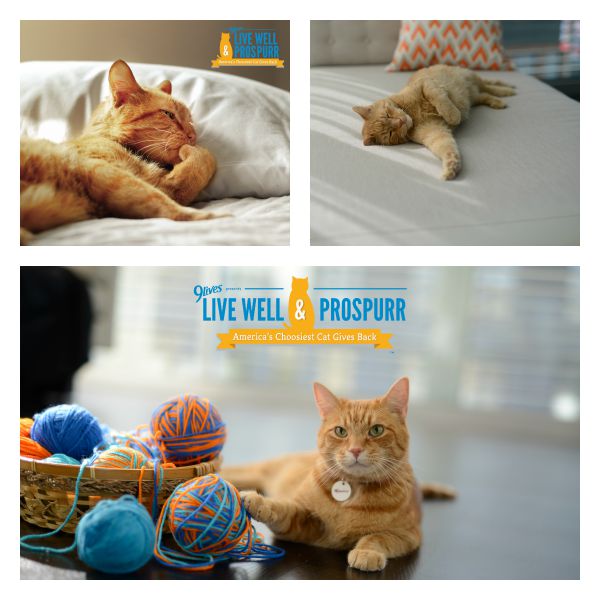 I know working in show biz can mean very long hours. How do you keep to your hangout regimen while you’re on set?

I’m going to let you in on a little secret. Just like Brad Pitt or Liam Hemsworth, I have a stand-in who sets up all my shots for me. That way I can rest in my trailer—ahem, carrying case—until the cameras start rolling. My stand-in is polyester and has a tag that says “Made in the USA,” but he does the trick. All I have to do is show up and look handsome… which is easy since I’ve spent the whole day getting my beauty rest.

Certainly the entertainment industry, and the world in general, has changed a lot since the 1970s. How do you keep up with the times?

I chase the times like a red-laser dot, and I’m always on the lookout for cool new tech gadgets that help cats and humans live well. One of my new favorites is the Apple Watch—it lets me track how much time I spend ‘napping’ versus the time I spend ‘sleeping.’ AND, today it told me that I took 19 steps going from my bed to my food dish—nothing like working up a sweat before a big meal.

What is the best advice you could give to someone who wants to live a better life?

Watch cat videos! A recent study conducted by some really smart people at Indiana University found that after watching a clip of Lil Bub, Nora the Piano Cat or of course, yours truly, participants felt increased levels of joy and energy. Science doesn’t lie, people! Bonus points if you watch said cat videos curled up in bed or on a fluffy couch.

If a cat watches cat videos, does it have the same effect?

It seems like you’ve got a pretty nice life, Morris.

I’m very lucky, but to me, being a celebricat isn’t about paw-ty hopping or head-booping Hollywood royalty. It’s about enjoying the simple pleasures that let me live well—and helping others to do the same. You may not know this but I was actually a rescue cat in Chicago before I was ‘discovered.’ This year, with your support, I’m donating a million meals to the ASPCA. Every time you tweet using #MorrisFeeds I’ll donate a bowl of 9Lives to a kitty in need. And I haven’t forgotten about my human fans: Go to www.prospurr.9lives.com for a chance to win $300 towards a relaxing getaway… You deserve it!

Don’t forget, visit prospurr.9lives.com where YOU can help Morris donate a meal to the ASPCA (#MorrisFeeds) and enter a 9Lives sweepstakes to win $300 towards a relaxing getaway (#ProspurrPromo).