TRAVIS TRITT  AND LARRY THE CABLE GUY TO HEADLINE

Announced today are the headline performers for the third weekend of the event:  country music legend Travis Tritt, and favorite award-winning comedian and multi-platinum recording artist Larry the Cable Guy. 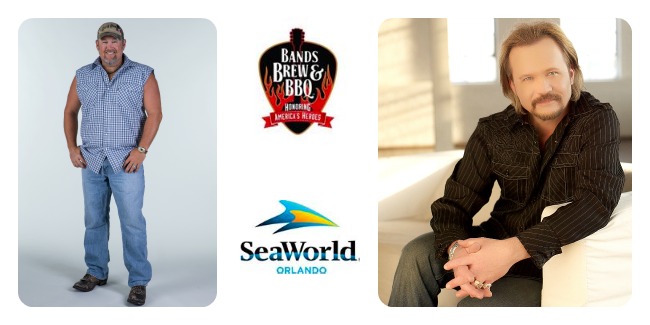 The event honors America’s Heroes and features live concerts from top classic rock and country bands and artists, tasty barbecue and thirst-quenching beer, and is included with regular park admission. Event festivities begin at 11:30 a.m. each weekend, with concerts at 4 p.m.*

Front Row Seating – Starting at just $39, guests can reserve a front row seat (just inches from the artists) and feel like part of the band.  As an added bonus, guests will enjoy $10 toward in-park spending.

Craft Brew Sampler – Sample 10 ice-cold craft beers from a selection of 30 for just $25.

A Marietta, Georgia native, Travis Tritt is dubbed one of “The Class of ‘89,” which included Country music superstars Garth Brooks, Clint Black and Alan Jackson; all whom dominated the charts in the early ‘90s. 2014 marks the 25th anniversary of Tritt’s music career, which is already proving to be busy with a heavy tour schedule planned in support of his recently released album, titled The Calm After…  Tritt released the album through the label he formed in July 2013, called Post Oak Recordings. Included on The Calm After… is a duet with Tritt’s 15-year-old daughter, Tyler Reese. The song, “Sometimes Love Just Ain’t Enough,” is a cover of the 1980s pop hit. Four of the songs on the album, co-produced by Randy Jackson, were either written or co-written by Tritt.  At this current time, Tritt has a new song at Country radio titled, “That’s What Dreamers Do.” The single was inspired by the independent biopic film As Dreamers Do, which is narrated by Tritt. “That’s What Dreamers Do” is now available through iTunes and www.TravisTritt.com.

About Larry the Cable Guy

Larry the Cable Guy is a multiplatinum recording artist, Grammy nominee, Billboard award winner and one of the top comedians in the country. Larry has won Billboard’s 2005 Comedy Artist of the year and Comedy Album of the year and he received the Billboard Top Comedy Tour Award in 2006.  He is a bestselling author and his book Git-R-Done, (2005) debuted at # 26 on the New York Times bestseller list. Larry was named to Forbes Celebrity 100 list in 2006, 2007, 2011 and 2012. This lists the hottest and most successful people in the entertainment industry. He has his own line of merchandise and continues to sell out theatres and arenas across the United States. Larry has created The Git-R-Done Foundation, which was named after Larry’s signature catchphrase, and has donated more than 7 million dollars to various charities.

SeaWorld Entertainment, Inc. (NYSE: SEAS) is a leading theme park and entertainment company delivering personal, interactive and educational experiences that blend imagination with nature and enable its customers to celebrate, connect with and care for the natural world we share. The Company owns or licenses a portfolio of globally recognized brands including SeaWorld®, Shamu® and Busch Gardens®. Over its more than 50-year history, the Company has built a diversified portfolio of 11 destination and regional theme parks that are grouped in key markets across the United States, many of which showcase its one-of-a-kind zoological collection of approximately 89,000 marine and terrestrial animals. The Company’s theme parks feature a diverse array of rides, shows and other attractions with broad demographic appeal which deliver memorable experiences and a strong value proposition for its guests. SeaWorld Entertainment, Inc. is one of the world’s foremost zoological organizations and a global leader in animal welfare, training, husbandry and veterinary care. The Company collectively cares for what it believes is one of the largest zoological collections in the world and has helped lead advances in the care of animals. The Company also rescues and rehabilitates marine and terrestrial animals that are ill, injured, orphaned or abandoned, with the goal of returning them to the wild. The SeaWorld rescue team has helped more than 24,000 animals in need over the last 50 years.