The Clearwater Regional Chamber along with the City of Clearwater and Clearwater Marine Aquarium have delivered a six-foot tall bottlenose dolphin sculpture named “Winter Goes to Washington” to Congressman David Jolly’s office on Capitol Hill. For those of you who have tried to follow the Dolphin Trail, www.VisitClearwaterFlorida.com/DolphinTrail, it will now take a bit longer. Dolphins are located in ten counties within Florida and this is the first one to leave the state, unveiled in Washington, DC today. 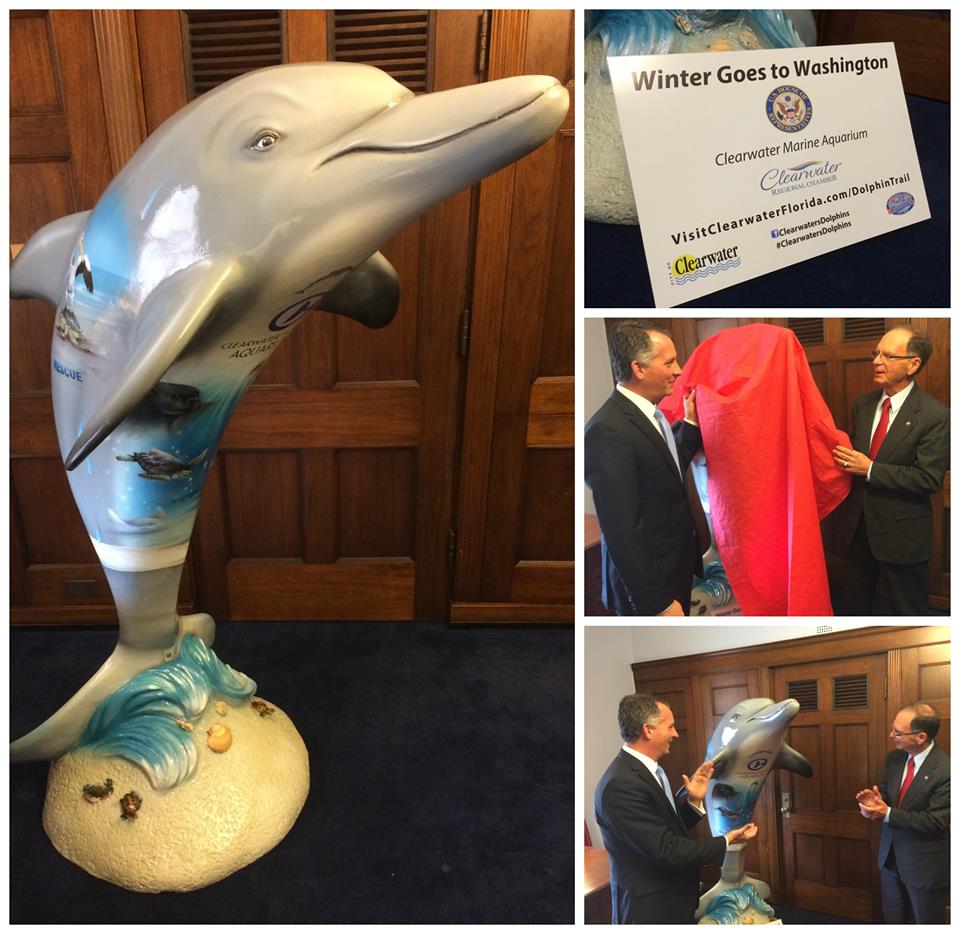 “This is an exciting opportunity to bring a piece of Pinellas County and Clearwater to our nation’s capital, introducing visitors to our DC office to the extraordinary tale of Winter and the work and mission of the Clearwater Marine Aquarium; that of marine life rescue, rehabilitation and release,” states Congressman Jolly (FL-13).

This public art project boasts over 100 uniquely decorated dolphins available for viewing. Bob Clifford, President/CEO, Clearwater Regional Chamber shares “The magnitude of stakeholders involved in this project is tremendous – over 100 dolphin owners, over 100 commissioned local artists and millions who enjoy seeing and photographing the dolphins.” The Clearwater Marine Aquarium’s resident dolphins, Winter, Hope, and Nicholas, have helped raise awareness of dolphins and other marine life. Winter has served as an inspiration to many with her injuries and subsequent prosthetic tail. David Yates, CEO, Clearwater Marine Aquarium notes, “Winter has become an inspiration for millions around the world. We are pleased to have her sculpture in Congressman Jolly’s office, representing Clearwater Marine Aquarium along with the sentiment of peace and hope that Winter spreads to so many.”

Dolphins are displayed at businesses, homes, ball fields and all levels of government – Pinellas County Courthouse has a water themed dolphin, the State of Florida has dolphins at each of their four official state highway welcome centers and Visit Florida office, and now one of Clearwater’s most famous residents, Winter, has arrived in Washington DC. Clearwater’s Mayor George Cretekos, who participated in today’s unveiling of this dolphin statue, said “As Clearwater celebrates its 100th anniversary, we thank Representative Jolly for bringing the Dolphin Trail to Washington. Just as Winter’s story has resonated with our residents and throughout the state of Florida, Representative Jolly’s efforts will help inspire not only his constituents, but all visitors to the Capitol.”

“I’m sure there will also be plenty of kids and families who will want to take a picture next to Winter while in DC and we are honored to be the first location on the Dolphin Trail outside of Florida.” – Congressman Jolly (FL-13)

Special thanks to artist Robert Daltry, who painted “Winter Goes to Washington” and also personally drove the 950 miles to deliver the dolphin.