The penguin chicks that recently hatched at SeaWorld Orlando are healthy and growing rapidly, some nearly tripling in size and weight. New photos are available here.

The chicks that hatched ranged between two to four ounces (56 to 113 grams). Today, the baby chicks now weigh between 18 and 36 ounces (515 and 1039 grams). The SeaWorld Aviculture Team weighs the chicks every other day to monitor for healthy weight gain. A special, SeaWorld fish-based formula is also fed to specific chicks to ensure they receive all the proper nutrients and maintain a healthy weight.

The penguin chicks hatched at Antarctica: Empire of the Penguin, SeaWorld Orlando’s newest attraction that features a colony of more than 250 penguins from four species – king, Adelie, gentoo and rockhopper. Antarctica: Empire of the Penguin transports guests into the icy world of the penguin like never before.  Guests experience the mysterious land through the penguins’ eyes on a first-of-its-kind family ride, connect with a colony above and below the water, and are inspired to make a difference. 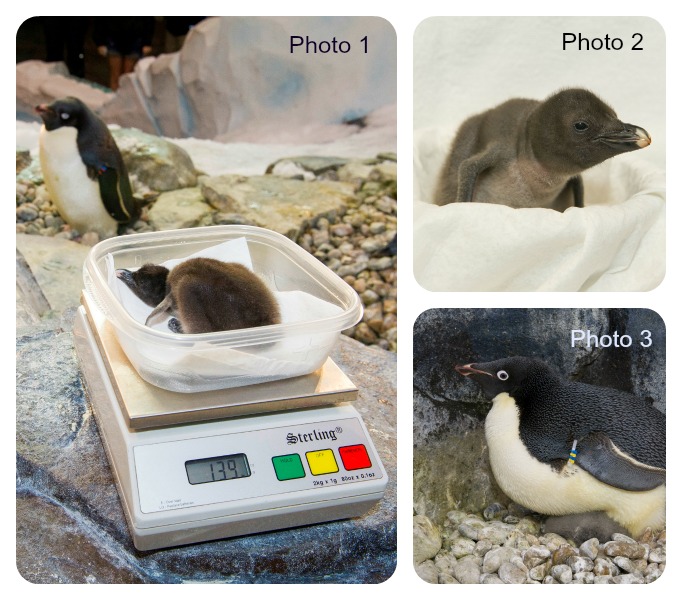 Photo 1– SeaWorld aviculturists weigh Adelie chick that hatched on Dec. 17 to monitor its progress.  When the chick hatched it weighed only 2.4 ounces  (68 grams).   The chick has grown significantly, now weighing 37 ounces (1039 grams).

Photo 3 –  Adult Adelie penguin keeps chick warm inside the Antarctica: Empire of the Penguin habitat.  The chick, which hatched Dec. 17, is the first Adelie chick to hatch this year at SeaWorld’s Antarctica and was seen in the footage shared last week.   This chick has tripled its weight since it hatched, weighing in at just over 23 ounces (672 grams). Adelie penguin parents will sit on their chicks in the nest to provide extra warmth for several weeks until their down feathers develop further.