IT’S NICE TO GIVE TWICE.

PURCHASING AN IKEA SOFT TOY HELPS CHILDREN NEAR AND FAR

IKEA Foundation’s annual Soft Toys for Education campaign soon kicks-off in IKEA stores around the globe. From November 9, 2014 – January 3, 2015, IKEA Foundation donates €1 (currently $1.30) for every soft toy sold. The donation goes to Save the Children and UNICEF, and is spent on children’s educational projects.

Locally, IKEA Orlando will also accept purchased soft toys – giving customers an opportunity to purchase once, but give twice. Children’s Home Society of Florida will receive the donated toys at the close of the charitable efforts.

“At IKEA, we believe that children are the most important people in the world. It’s great to see the awareness of this campaign grow over the years, allowing us to help more children begin and stay in school,” said Kendra Ferguson, IKEA Orlando’s Local Marketing Specialist. “We now have customers asking us when it will begin. It’s a great time to teach their children about giving back; and with the option to give twice, parents can let their children select a toy for themselves and one that they think another child would enjoy receiving.”

IKEA’s soft toys star in the store’s children’s books and new card games that train memory, as well as visual and social skills. IKEA Foundation will also make a donation when these items are purchased – making a great holiday present package, as every donation gives the powerful gift of an education to children in need around the world.

Since 2003, the holiday sales of the furniture retailer’s soft toys has raised nearly €67 million, supported 99 projects in 46 countries, and helped more than 11 million children receive a better education.

The IKEA Foundation, which works with a total of 31 nonprofit organizations, is the largest global corporate donor to UNICEF, the United Nations Refugee Agency (UNHCR), Save the Children, Clinton Health Access Initiative (CHAI) and KickStart International. 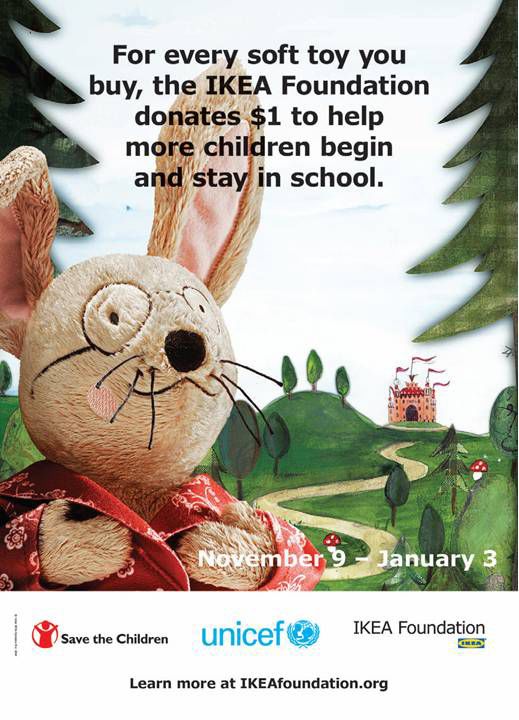 Since its 1943 founding in Sweden, IKEA has offered home furnishings of good design and function, at low prices so the majority of people can afford them. There are currently more than 360 IKEA stores in 45 countries, including 40 in the U.S. IKEA incorporates sustainability into day-to-day business and supports initiatives that benefit children and the environment. For more information see IKEA-USA.com/Orlando,