Avery Bishop, an eight year boy from Icard, North Carolina visited Winter and Clearwater Marine Aquarium on September 4, 2014.  Avery had just been released from the hospital a few days ago and his parents were told he only had a few days to live. They inquired if they got him to CMA, would it be possible for him to have a picture taken with Winter.  Avery also loves fire trucks.

Avery is battling terminal illness and suffers from Atypical Cystic Fibrosis, Autism, and Mitochondrial Disease. He has been through so much over the years, but this last year his health has started to decline. Although his health is declining, Avery keeps a smile on his face along with a positive attitude.

Once Avery saw Winter on Thursday, there was an immediate change in Avery’s awareness and temperament. For the next hour, Avery showed an energy level that his family had not seen in two years. 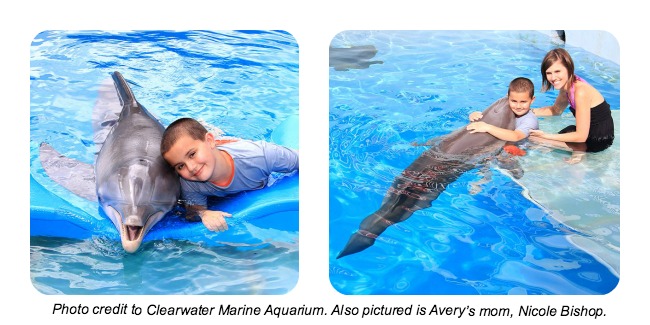 After his time with Winter, Avery was escorted to three fire trucks that came to visit him from the Clearwater Fire Department, including a tiller truck that took him for a ride around Island Estates.

Check out Avery’s Facebook page of Bravery for Avery.