Exciting news at SeaWorld Orlando, on November 30, SeaWorld Orlando welcomed the first chick to hatch at Antarctica: Empire of the Penguin, the all-new attraction featuring a colony of more than 250 penguins from four species – king, Adelie, gentoo and rockhopper. 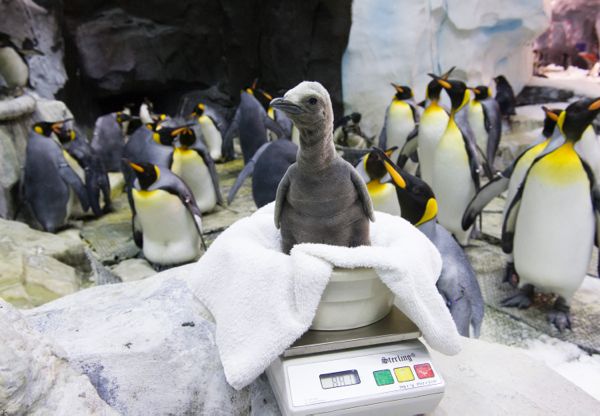 The nearly two-week-old king chick is now weighing in at 30 ounces (882 grams) and currently being raised by its parents with routine check-ups from the SeaWorld Orlando Aviculture Team who monitor the chick’s weight and overall development. Although small now, it will grow to be more than 24 pounds (11 kilograms) and over 2.5 feet tall. This chick is one of two king chicks that have hatched within the last two weeks with more expected within the coming weeks.

Caring for the king chick is a full-time job shared by mom and dad, and it starts before the penguin even hatches. Since king penguins don’t build nests, the female lays one egg and both parents share incubation duties by placing the egg on their feet. This is also how they carry the chick once it hatches. Guests may get a rare glimpse of the king chick during feedings.

Antarctica: Empire of the Penguin transports guests into the icy world of the penguin like never before.  Experience the mysterious land through the penguins’ eyes on a first-of-its-kind family ride, and then, connect with a colony above and below the water and be inspired to make a difference.