The Baby Will Join the Crash on the Serengeti this Morning

TAMPA, Fla. (Oct 31, 2012) – Busch Gardens Tampa Bay is asking for help from the Facebook Fans to name the new baby white rhinoceros on Tuesday, October 23, 2012. The female rhino, which was originally born on the 26-acre white rhino habitat on Busch Gardens’ Serengeti Plain, has spent the last week bonding with her mother off of guest view. The baby and her mother will rejoin the crash, or group of rhinos this morning.

Busch Gardens needs help naming the baby. Starting today, the public can “like” the Busch Gardens Facebook page (www.facebook.com/buschgardenstampabay) and vote for its favorite names. The polls will close at noon on November 7, and the wining name will be announced the following morning. 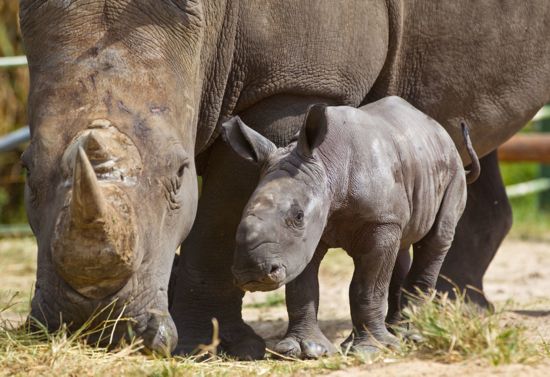 Guests can help chose from the following names, inspired by their Swahili meanings:

Guests can also read the Busch Gardens Blog to learn more about the baby’s progress from her keepers.

The baby’s mother, father and another female white rhino were airlifted from Kruger National Park in South Africa in 2001 through the efforts of the International Rhino Foundation (IRF), a non-profit organization dedicated to the protection of rhinos. Fewer than 15,000 white rhinos remain in the wild, and approximately 200 live in zoological facilities across North America.

Since its inception in 2003, The SeaWorld & Busch Gardens Conservation Fund has granted $7 million USD to more than 500 projects in the U.S. and around the world, including $194,000 USD grants to rhino conservation projects. The Fund was created by SeaWorld Parks & Entertainment and is a registered 501(c)(3) non-profit charitable foundation dedicated to supporting environmental and wildlife conservation initiatives.