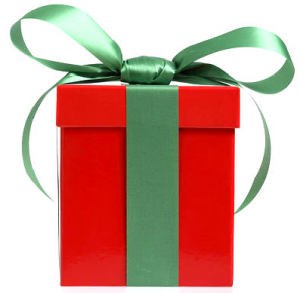 My toddler doesn’t really understand that Christmas presents are supposed to be opened on Christmas day. Last week, I attempted to place a wrapped package under our tree to test him. Sure enough, he spotted it immediately and begged to open it. I explained that he could not since that gift was for someone else, but he didn’t seem to get it. I couldn’t take the disappointment and finally caved (what can I say, I used to be am the same way). I let him open the paper but NOT the box that contained the gift. He was so excited! I gave him an empty box to play with instead and that kept him busy for hours!

Yesterday, a box arrived from his cousins and it contained three beautifully wrapped gifts for him. I couldn’t resist putting them under the tree, they were so pretty. He was content playing with the shipping box the gifts arrived in, so I didn’t think we’d have any problems.

Since we are flying on Christmas morning, our family will be opening gifts on Christmas Eve. Tonight Santa will follow our tradition and leave one gift for my son – Christmas pajamas! Anyway, I guess you can say I caved because after we ate dinner last night I told my son he could open one of the gifts he received from his cousins. He tore into the package and discovered Melissa & Doug floor puzzles and I cannot even explain how happy they made him. We sat on the floor and put them together and he was the happiest boy in the world.

I was cleaning the kitchen and heard a tearing noise…my son made the decision to go ahead and open another gift! This time Disney/Pixar Cars underwear, he was a very happy boy (now if only he’d understand what those are for)! After that, he went in his room to play and all seemed normal. About 30 minutes later, I realized it was way entirely too quiet in the house. Suddenly I hear “mom mom” and my son running to me with a new Play-Doh set in his hand. Yes, he somehow managed to grab the third present from under the tree and tip toed back into his bedroom without me even realizing it!

Tomorrow morning is going to be so much fun, I bet I don’t sleep tonight!