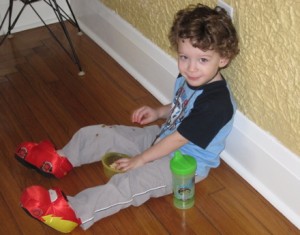 So my son’s latest fascination is Disney/Pixar Cars, traffic lights and basically anything with a motor. He sees a traffic light and let’s us know that red means “stop” and green means “go”. He is quite the backseat driver! He also imitates some of the frustrated noises my husband and I make when someone cuts us off in traffic or when we use our horn. We have learned not to say anything we would not want him to repeat, because we already had one incident where he said an explicit immediately after he heard it said to another driver.

Last night, we took him to see The Osborne Family Spectacle of Dancing Lights at Hollywood Studios. He was amazed to say the least! After we grabbed a bite to eat, we started strolling along and found Lightning McQueen and Tow Mater. The photo line was long , but I knew he’d want to see them up close. Would you believe I left my camera at home? How does a mom blogger forget such an important item? Sigh! Anyway, we stood on the side lines and watched all the other happy children with their prepared parents snapping pictures left and right. He didn’t want to leave, just wanted to watch and listen (Tow Mater’s engine moves and there are loud engine and tire squealing sounds coming out of McQueen). I was a bit concerned how he’d react when we said goodbye to them, but we easily pulled him away without public humiliation.

This morning I heard him calling for me so I entered his room singing a happy little good morning song. He immediately put his hand up and said “stop”. Great, I thought he only associated “stop” with driving, but no…he can correctly use the word along with hand motions! I’m thinking he may still be bitter about the Cars display.