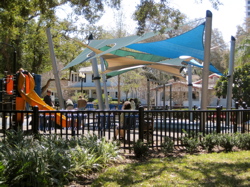 I may be a little overprotective of my kid, but I don’t think I obsess about it. Where is this coming from? Well, the past couple of times we’ve been to our local playground, I stood back and observed how other parents “watched” their children. Please keep in mind, this is a very busy playground in the middle of a city. On several occasions, I have witnessed adults without children sit down and watch kids playing and it gives me the creeps! I’m not trying to stereotype these individuals, but it seems rather bizarre.

I am always in the same vicinity as my son, but I still give him his space. At the age of 2, I know he is fast and doesn’t recognize danger.

On our last playground visit, there was a group of three women so engrossed in their conversation that their very small children (all appearing to be under the age of 3) could have disappeared and they would not have even noticed! I’m not exaggerating either, they were not even facing the same direction as their children. This went on for about 30 minutes, then the ladies finally decided it was time to take their conversation to a restaurant. Surprisingly, they did remember to gather their kids before moving on.

Then there was the father of the “bully”. My kid was quietly playing and all of the sudden this older boy came out of no where and shoved him off a plastic hammock swing. The father watched it happen and did absolutely nothing. Instead, I gave the man a glare and then encouraged my son to go to the big kid playground area since it was empty. Off we went, far away from the “dad of the year” and his brat.

The last annoying thing I’m going to mention is the mother who helped her 18 month old daughter try to walk up the slide for at least 10 minutes while kids waited to go down. No joke, at least 5 kids were standing on the platform ready to go! All it took was one impatient tot and that slide walking princess would have been a missile. Trust me, if it would have been the mother who would get hit, I would have jumped in line to try and knock her down!

It’s not my place to say something to these parents or children, instead we just find another play area or go home. Obviously, there are parents who do a terrific job watching over their kids and disciplining them, so thank you to those individuals that make playtime a good experience.