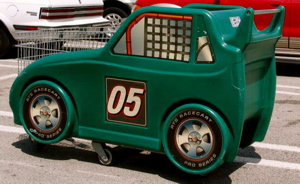 I did something yesterday that I swore I’d never do (I guess I could add it as #9 on my list or just start a new one since I’m sure it will continue growing). I used one of those darn car carts while making a quick trip to Publix with my toddler.

What a mistake. To say these have to be one of the worst inventions ever is a complete understatement. Of course the second my son saw them lined up outside the grocery store he started going nuts! What was I supposed to do, we just left the doctor’s office and needed to get his prescription filled. He didn’t feel well and I thought this would be a great way to keep him in good spirits. Also, the antibacterial wipes were conveniently displayed nearby so I gave it a good wipe down before strapping him inside.

I selected a car cart that was way smaller than the enormous land yacht pictured. I started pushing the heavy cart through the aisles and I cannot tell you how many times I had to say excuse me because the cart was just so bulky. It was like being a teenager behind the wheel of a car for the first time, very difficult to judge turns and it felt unnatural to maneuver.  I hit two displays while trying to make turns, thank goodness nothing fell down!

The cart made my sick son very happy so that is all that mattered. Who cares about the dirty looks I received, the swearing I did under my breath as I bumped into things or the rude people that rolled their eyes as they tried to pass by. It’s all part of being a parent and doing whatever it takes to avoid public tantrums.