A few weeks ago, I had the pleasure of meeting a fellow Orlando blogger, Lee from My Sentiment ExactLee. We had been interacting via Twitter, so it was great to finally meet in person at the Pull-Ups Potty Dance Party. After the party, Lee conducted a video interview with Grammy-nominated Disney artist Ralph Covert from Ralph’s World and also blogged about it. Both the video interview and blog can be found here. 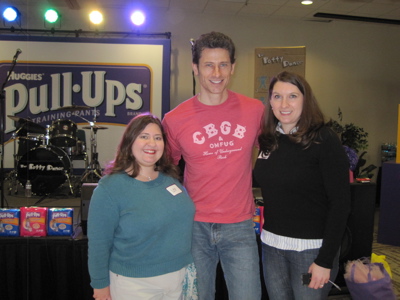 Above is a photo of the two of us with Michael Alban who is the bassist and backup singer for Ralph’s World. He is also an actor and model (did I mention Lee thinks he’s totally cute)? Anyway, it was a fun event and I wanted to share Lee’s blog with my readers. She was recently voted a Top 50 Power Mom by Nielsen Ratings which is a huge honor! Also she hosts a successful web show on MomTv called MySentimentExactLee Interviews, Product Reviews and Daily Views.

My Sentiment ExactLee is on my blogroll and should be on yours too! Also, don’t forget to enter my contest for a Pull-Ups gift bag including a Ralph’s World autographed cd!!!