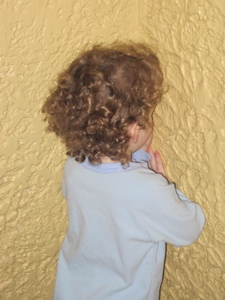 Words cannot begin to express how much I am over the toddler stage. My son has quickly learned how to express his anger and frustration by throwing monster sized tantrums! It doesn’t take much to set him off either.

Thankfully he seems to melt down mostly when we are at home. I couldn’t imagine dealing with this in public, I would be so embarrassed! Just the thought of being on the receiving end of the cold glares makes me cringe. I have admitted in the past, I used to roll my eyes at parents who let their children behave out of control in public, NOW I sympathize with them because I know it could be me next! And, I also know it’s not their choice for their kid to be acting like that.

This past week, I introduced my toddler to the “naughty corner”. This was a technique I learned from watching Super Nanny and so far, it seems to work. When he is engaged in a bad behavior  I will either put him in the corner or tell him to put himself there. It’s funny, the instance he is in the corner, he stops acting like a crazy person and calms down. I leave him there for a few seconds then release him by asking “are you going to be a good boy?”. Once he nods yes and the punishment is over, I open my arms wide and he runs and gives me a hug. I then explain to him why he was put in the corner and that he shouldn’t behave that way.

Hopefully, the naughty corner will continue to be successful. We’ll see. I am OPEN to suggestions!