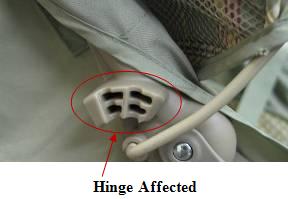 Here we go again, another major recall for parents to be aware of. Last year, it was Maclaren that recalled over 1 million strollers, well now it is Graco’s turn and for similar reasons! Graco Children’s Products Inc. is recalling approximately 1.5 million strollers and travel systems that were sold at major retailers after fingertips were amputated by hinges on the products.

This recall by Graco includes certain model numbers of its Passage, Alano and Spree Strollers and Travel Systems (the complete list can be found here). These particular strollers were made in China by Graco and sold at AAFES, Burlington Coat Factory, Babies R Us, Toys R Us, Kmart, Fred Meyer, Meijer, Navy Exchange, Sears, Target, Wal-Mart and other retailers nationwide from October 2004 to December 2009.

The Consumer Product Safety Commission indicates the strollers pose an amputation and laceration hazard to young children when opening or closing the canopy feature. The government advised consumers to stop using the strollers immediately and contact Graco at (800) 345-4109 between 8 a.m. and 5 p.m. ET Monday – Friday to receive a free repair kit.