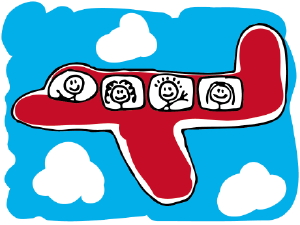 I am starting to get a bit nervous about an upcoming trip my family has planned. It has been six months since we took our son on a plane and at that time, he was still breast feeding which made life so much easier. He could have some milk and fall right to sleep in my arms. Now, he’s not a cuddly baby and is constantly moving so this trip should be interesting.

I don’t want to be “those” parents with an uncontrollable child (you know exactly what I’m talking about, the ones you shake your head at). I am praying my son will be well behaved and if not, I may have to order a mimosa or something to calm my nerves!

I have received some great advice about packing toys and introducing new ones to peak his interest. Also, snacks are vital and I plan on taking a nice variety. I’m wondering whether I should purchase a portable dvd player, but I know he won’t let me put headphones on him (he cannot stand hats so what makes me think he’ll agree to something on his ears).

We did not purchase a separate seat for him but are hoping the plane is not full so we can have a row to ourselves. If this trip turns out to be complete chaos then we will definitely consider spending the extra money on our return flight. He does great in a car, so I’m wondering if having him confined in his car seat would make traveling a bit easier.

I purchased a GoGo Kidz Travelmate to push him through the airport in his car seat. I refuse to spend $50 per day to rent a dirty car seat so we’re taking his with us. The Travelmate will allow us to roll him right to the plane. Like I mentioned previously, if there are extra seats I will take the car seat on the flight (his Britax Boulevard is FAA approved). I made sure to confirm this fact instead of assuming like I did with his infant car seat on his first flight to NYC.

Any additional advice for flying with a toddler? I know I probably just need to relax, but I hate the thought of disrupting others. Thankfully, the flight is less than 2 hours and I scheduled it during his nap time. Let’s pray my strategy works out!