There was never a question in my mind about breast feeding my baby and my goal was to try for at least 6 months.  My husband and I even went to a Breast Feeding 101 class so we would know what to anticipate.  Despite the efforts, nothing  prepared me for the feeding machine I became.  My son had quite the appetite and for the first 3 months, I felt like all I did was feed him. We really didn’t get out and about much during that time because I wasn’t comfortable feeding him in public.  If we went out for the day, I would make my husband park in a secluded area of a parking lot and I would cover up with a nursing wrap even though I knew there was no chance of someone seeing us.

Twelve weeks after my son was born, my maternity leave was over and I returned to work. While he was at daycare, I was able to get into a consistent pumping routine.  I only fed him from the breast in the mornings, evenings and at bed time.  This worked out really well for us and my supply was plenty.  My layoff occurred when my son was almost 5 months old and then we were back to the breast exclusively.  I have to tell you, my son was in heaven.  I was also thrilled that I didn’t have to pump and store the milk either.  There were no bottles or breast pump equipment to steam clean. I was experiencing the convenience of breast feeding, not having to pack a bottle if we went somewhere.  The tap was readily available and he had spaced out his eating schedule so I wasn’t feeding him constantly.  It was then I made the decision I would breast feed him as long as I could. 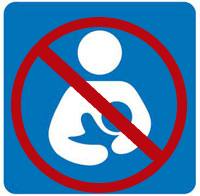 The day my son turned 9 months old, he went on a nursing strike.  I couldn’t figure it out, the previous day everything was fine then all of the sudden he would scream bloody murder when I put him in the feeding position.  I attempted to give him a bottle of expressed milk and he fussed about that as well.  His 9 month appointment was the following day and his pediatrician ruled out an ear infection and determined his bottom teeth were the reason.  The pediatrician instructed me to somehow feed him milk or formula, but my son had no idea how to use a sippy cup and he refused a bottle.  It was time to get creative, so I started feeding him milk from a medicine dropper (the syringe that came with his Baby Motrin).  This worked; however, it was very time consuming and messy.  The sippy cup training was in full gear, but it took a good month before he really understood that the cup wasn’t a toy.

I continued to offer the breast to him over the next couple of weeks and he continued to scream.  A few times, he would act like he wanted to nurse but he was conflicted about what to do.  He’d open his mouth and try to latch on, then he’d cry.  A few nights he actually fell asleep with my breast in his mouth, but refused to nurse.  I finally said enough is enough when he decided that I would make a good teething toy.  OUCH!  That was it!

So, I continued to pump but my supply was diminishing rapidly.  I was supplementing with formula and he didn’t seem to mind at all.  Finally, when he was 10 1/2 months old, I threw in the towel.

I will admit, it was emotionally difficult to know that my son weaned himself.  It was at that very moment I realized my baby wasn’t a baby anymore. The bonding experience we shared for 9 months was unbelievable and I will forever cherish it.

Did your baby go on a nursing strike? If so, did you have success at beating the strike? Any advice for moms out there who are facing a similar challenge?

Thanks for visiting The Unemployed Mom! Don’t forget to become a facebook fan!